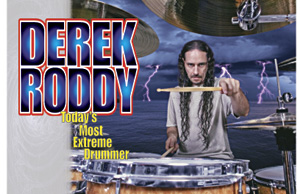 “Extreme metal is musician’s music, like fusion and jazz. That’s what has kept me in it for so long.”

Blast Beats. If you’re into metal drumming, then you probably know all about ’em: blistering 16th- and/or 32nd-note grooves using single strokes between the bass drum and snare drum (right hand usually mimicking the bass drum on the ride cymbal). And if you’re into blast beats, then you probably know about Derek Roddy. In the extreme metal world, Roddy rules! He has been the most talked about and highly regarded blast drummer in this ever-growing genre for the past several years.

Roddy jumped into this adrenaline pumping style of drumming when extreme metal music emerged on the ’80s underground scene, and he has continued to push the bpm’s off the scale to speeds almost humanly impossible to perform. When Roddy’s former group, Hate Eternal, released I, Monarch in 2005, his superhuman drumming set the extreme metal world on its ear by unleashing brutal beats pushing 16th-note blasts at an unheard of 270 bpm.

Today Roddy is currently involved in three metal-related projects, Today Is The Day, Traumedy, and his Florida-based X-metal band, Serpent’s Rise. Derek is regarded as the “master blaster” of extreme metal and has become in-demand at drum festivals and clinics worldwide to help demystify this often-misunderstood genre and to prove that his drumming is more than just about speed. His ambidextrous, technically challenging, new concepts stretch far beyond mere speed, and reveal a versatile, sensitive, and humble player with a levelheaded attitude towards the business of music.

Roddy has also recently released an insightful and educational instructional book/CD called The Evolution Of Blast Beats (World Music 4all). MD caught up with Derek after his recent appearance at the prestigious AUWD (Australia’s Ultimate Drummers Weekend). Listen up, Metal Heads!

Derek: I’m not a heavy cymbal player like most metal drummers. I use thin Meinl cymbals. And I don’t use thick heads. I use Remo coated Ambassadors on all my drums. If you sat down behind my kit, you would almost think it was a jazz players setup. Also, when I started playing blast beats, I didn’t realize that most guys were using double bass, so I learned to play them with my right foot. This obviously helped to develop my foot speed. I’m still trying to get my left foot up to the speed of my right.

MD: Who are your metal drumming double bass influences?

Derek: Dave Lombardo and Charlie Benante. I remember hearing Lombardo’s double bass drumming on Slayer’s Hell Awaits LP and knowing instantly that this was the type of double bass drumming that I wanted to be able to play–fast, aggressive, and in your face! I also love what Jason Bittner’s doing now with Shadows Fall.

MD: There are some incredible clips of you on the Internet, showing your amazing speed. I also saw some that showed you playing left foot clave within your metal chops. 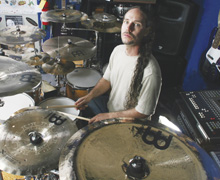 Derek: Yes, I’ve been working on incorporating that into my drumming. I use a Rhythm Tech Ribbon Crasher as my left foot clave sound source as opposed to the typical cowbell or block sound. I’ve started to combine the clave with my blast beats to help add some dynamics and groove, since blast beats are nonstop 16th or 32nd notes and typically one-dimensional. My main purpose for left foot accents is to also embellish what the guitar or vocals might be doing in a song to add more rhythmic flavor to the music.

Derek: There’s a lot of maintenance that goes along with playing fast. I don’t have the speed that I did when I played with Hate Eternal, simply because I don’t have the interest, and because it takes a lot of physical conditioning. There’s never a comfort level when constantly pushing yourself to your physical limits. You’ve got to relax and feel like your exhaling at all times.

For me, it’s important to hear the beats in half time, or feel the quarter-note pulse, instead of every 16th or 32nd note. This gives the groove more motion and a pulse inside all the notes. You’ve got to pace yourself, push yourself, and drink lots of water. It has nothing to do with proper technique. It’s all about doing it, everyday, just like training to run a marathon.

I don’t work on pushing myself that hard anymore because I don’t have the desire. I’ve never been one to practice my speed with a metronome. If I don’t have other musicians to create the energy for the music, then there’s no reason to practice speed for speed’s sake. I play everyday. I try and practice a couple hours a day and usually work on meter, sound, and consistency. I’ll also isolate a weak area and work on that, which is usually my left foot.

MD: There are no special techniques in developing your speed?

Derek: No. I think technique is an overused term in drumming. I believe we all develop our drumming skills in basically the same way and then it becomes a matter of pushing yourself to the level that you want to achieve. I think all the discussion of various techniques is a bunch of hogwash. It’s basically overused terminology for people who don’t want to do the work that’s required to achieve your goals. Once you develop the physical principles of controlling drum sticks in your hands, it’s simply the natural evolution of motion that allows you to advance your skills, not some technique that somebody put their name on.

For the rest of the interview, pick up a copy of the December 2007 issue of Modern Drummer at a music store, book store, or newsstand near you.