Console: At home I do most of my mixing in the box–that’s to say, inside Pro Tools. For serious mixing I go off campus. On the input side I have a few nice pre-amps like Amek, Neve, API, Daking, and the underrated Drawmer 1960. And for overflow I have several Mackies (32×8, 1604, 1202) and a few Presonus pre’s.

Monitors: For about fifteen years I’ve been using KROKs powered by a Yamaha 2200. Recently I learned they have a significant high-mid boost, and that might have worked in the favor of an old deaf drummer to not add more high-mids. I also use two self-powered M-Audio pairs (one with a sub), Yamaha NS10s, and various Horratones so I can go between and compare. Plus I monitor with headphones, especially late at night. For tracking I love the Vic Firth phones. All this is configured through a Mackie Big Knob.

Main recording device: Pro Tools HD with a 192 HD. I also use Abelton Live a lot; in fact, 99% of the first Tuner album was recorded direct to Abelton. Live really dominates my laptop on the road with my project KTU: The house is a surround mix, so I use an M-Audio interface to give the house multiple outs.

Possibly the biggest drag with doing lots of digital recording is keeping up with data management. I bet I do as much of that as I do drumming. So external hard drives seem to breed like bunnies around here.

Computers: Dedicated Mac G5 for Pro Tools and plug-ins, and a G4 laptop that I also take on the road to run Ableton and others. 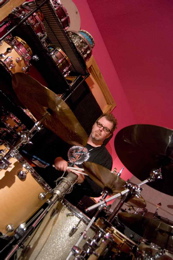 Microphones: A Neumann FET47 (the first real mic I ever bought, a great kick mic) and an old AKG D12, plus pairs of Neumann U87s, AKG 414s, 421s, AT451s, AT4033s, some Groove Tube mics, a magical AKG C12A, a stereo ATM that works great to take around for overdubs elsewhere (like the kitchen or garage), some weirdo mics I’ve found while touring, plus the solid traditional stuff like a Shure SM57, which is the snare drum standard for me. I was also just given some Earthworks mics, which have amazing detail–I never heard the downstairs TV in my overheads before!

The biggest drag about owning nice mics is repairing them.

Drums: This is where home studios really kick butt. I could never take all these options to a studio. Most clients send me multitracks, and that means I have a good sonic picture to work against as I audition my sounds.

I have so many wonderful drums that it’s really fun to track songs at home–lots of toms, percussion, and freaky things. And I’ve got gobs of snare choices. I usually start with a copper 5″ DW with those DW Spectrasound snare wires. That drum gets first crack and sets a standard. Then if need be I’ll move out from there to other snares to chase the spirit of the song.

The 22″ DW bass drum I have set up with the EMAD head is sounding absolutely unbelievable. But for less conventional applications I have some huge Taos drums and some old Radio Kings. And I’m really enjoying my old Rodgers and Ludwigs after working in Matt Chamberlain’s room a few years ago. Matt leant his studio to me and Trey Gunn for the TU record. He’s is a vintage nut and really into it, so I had a ball playing his incredible museum of gear.

Cymbals: Working at home means I can avoid the cartage problems of the past, so I can indulge myself with cymbal choices collected over forty years of playing drums. Lately I rediscovered a 10″ Paiste/Ludwig cymbal that I got in the 8th grade. It sounds really different (and it’s all over the new Tuner CD).

For the last couple years my main recording cymbals at home have been the Paiste Giant Beat Bonham set (15″, 18″, 20″, 24″). To my ears they’re really well-balanced harmonically and volume-wise. But Paiste just sent me a set of 20s (14″, 16″, 18″, 20″), and they’re totally different–more R&B, but also amazingly balanced as a set. I also still use Paiste Signatures, 2002s, 303s–all that good Paiste stuff–and I have some old Ks collected on my trips to Istanbul.

Electronics: Since I’ve been doing the e-drummer thing for thirty years, I’ve amassed a huge collection of beat boxes, samplers, Wave Drums, plus all the loops and samples, and even several over-priced boat anchors that each still manages to do one special thing that no other box will do. It’s amazing: As useful as the V-Drums, ddrums, BFDs, DFH, Battery, Stylus, and Drumagog all are, I will still at times use an old box like the SDSV or Synare–or even a real drum…that gets processed. [laughs]

These days its hard to separate “recording” from “sampling.” After all, samples are usually just short recordings. But I have huge libraries of samples that I’ve been collecting since before the Mr. Mister days, in case we wanna drop a “Broken Wings” snare or XTC “Klennex box” sample on a track. More and more, though, I am sort of taken by this guy Matthew Herbert’s ideas on sampling and recording, making everything in the moment.

Hats: I offer my clients and guest hats to wear to loosen that sterile studio mood.