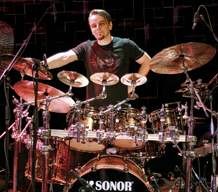 It’s not as if Gavin Harrison needs to lurk on the Internet. He’s popular. You like him! On the strength of his books, DVDs (including the recent Hudson release, Rhythmic Horizons) and performances with UK progressive band Porcupine Tree, you voted him number-1 prog drummer, a real coup. So what does Harrison find online that’s eluded him on land?

“A lot of requests come in from myspace.com,” Gavin explains. “People sign up as my ‘friend’ (at www.myspace.com/gavharrison) and, while I’m courteous, I don’t always follow their links. But one day I did. On this particular guy’s site, two bands were playing simultaneously and it was similar to the King Crimson double-trio idea–two virtual bands playing in different tempos and keys. I wrote to this guy and, since PT was touring near his town, we met up. His name is Rick Byer and he sings like David Bowie and plays bass guitar in a sort of Chapman Stick fashion.

“I had lots of surplus ideas that didn’t get used in Porcupine Tree,” Gavin continues, “and Rick said that he would be inspired to use these and write songs off them, as in I’ve been waiting for someone like you all my life! Within a week he’d written three songs, and we quickly came up with ten. I then emailed them to Robert Fripp, and he played on five of the pieces. Dave Stewart is on them, too. It’s nice to have two of the ‘grandfathers of prog’ contributing.”

Check out these other articles from Modern Drummer about Gavin Harrison: