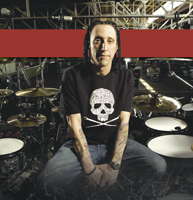 Morgan Rose uses the word “resurrected” when describing the current state of Sevendust, the band he co-founded over ten years ago. This time last year, the group’s then-record label disintegrated while barely into the promotional cycle for 2005’s Next, leaving Sevendust without tour support. Add to that a string of personal crises for the drummer including a difficult divorce, a battle for custody of his daughter, and the death of his grandfather, and you can understand Rose’s gratitude for a creative rebirth.

When Morgan and Sevendust guitarist John Connolly started writing material for Alpha, the band’s seventh release (via its new relationship with Warner Music Group), Morgan expunged much of his frustration through his lyrics. “The stuff I was writing was all about losing my mind and how I was struggling to keep above water mentally,” he confesses. “It helped that this is a more aggressive record. I was also more drum conscious, and I made sure we had enough time to rehearse so that I could get in some serious woodshedding.” Alpha has earned high praise as Sevendust’s heaviest and most cohesive album to date.

Much of the chemistry Morgan and John share as songwriting partners has to do with John being a former drummer. “John will write a lot of beats on the drum machine that sound nothing like what I play when the song is recorded,” says Rose. “Sometimes he’ll get on to something that’s really tough and almost impossible to pull off physically. Many times, I’ve taken the easy road and said, ‘That sounds good, but I’ll just play this’–because I can’t play that,” he laughs. “On Alpha there were a few parts that I realized were very tough, but I decided to go ahead and learn them. I wanted to hear what it would sound like with me playing it rather than a drum machine. That’s the challenge I brought to my performance on this record.”