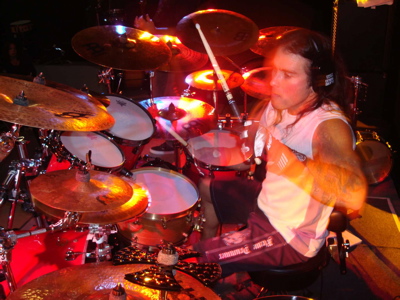 Hi, everyone out there in drum land, Jason Bittner here, recently returning home after completing my first ever U.S. clinic tour in support of my brand-new Hudson Music DVD, What Drives The Beat. We hit stops on the East Coast for seven intense days, and it was successful and a lot of fun.

Joining me for the trek on bass was my fellow Shadows Fall member Paul Romanko. This was an opportunity for the two of us to get back in the van by ourselves DIY style, just like in the old days when our band was first trying to make it. So not only was this tour a lot of fun for us, it also brought back some great memories and taught us never to take for granted what we have achieved in the music business. Now I’m going to tell you all about it.

Day 1: Boston, MA, Guitar Center
Well, since SF is a Massachusetts band, Boston was a great place for the clinic tour to begin. I started the morning at 7 A.M., picking up and loading the van with all my gear. (God, I need to start playing a four-piece!) Then I proceeded to pick up Paul and head to Boston. GC was ready and waiting for us when we arrived, and we anticipated a good night. Also waiting was the first shipment of the actual physical DVD, which put me at ease, considering it had gone to the duplicator just a week prior to the tour. Way to go, Hudson! 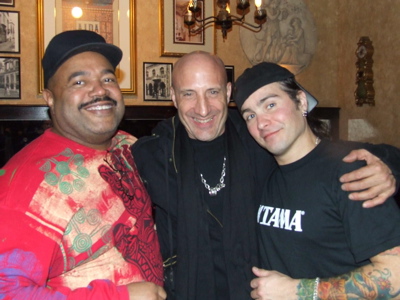 There was, however, one catch: Dennis Chambers and Kenny Aronoff were BOTH in town doing clinics as well. Um, can you say “crickets”? Luckily, it wasn’t that bad—we did get a sizeable crowd despite the fact that two drumming giants were within spitting distance. As they say, the show must go on, and it did! Afterward we got together with Dennis, Kenny, and some of our friends from Pearl and Zildjian (hi, Johnny) and had a great dinner, thanks in part to my friend Candi Bramante from Daddy’s Junky Music—you rule! Here’s a shot from dinner.

Day 2: New Haven, CT, Sam Ash
Eleven A.M. checkout came quickly this morning. We headed over to Dunkin’ Donuts for some much-needed joe (this will be a recurring pattern), and then we were off to Connecticut. We were making great time until we came across an accident about ten miles from Sam Ash—the first of many traffic “encounters” we would hit during the tour. Fortunately, my wife had coerced me into getting an iPhone a week prior to the tour, so I just used my handy built-in GPS to route us to the store. Sam Ash welcomed us with open arms and got us set up for a great night.

Clinic number two went off really well, and I even brought some special guests up at the end of the night. Recently I’ve been playing in another project called Dark Day Sunday, which is headed by former Fates Warning guitarist Frank Aresti, and since this is a Connecticut-based band, I brought Frank and our bassist, Ed, up to jam a few songs. All in all it was a lot of fun, and the Ash staff ruled. Thanks to our buddy John Conley, and Eric in drums.