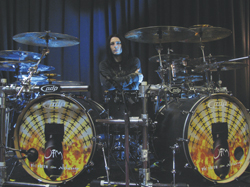 The programming-heavy hard rock of L.A.’s Opiate For The Masses often draws aural comparisons to industrial stalwarts like KMFDM and Nine Inch Nails. But drummer Seven Antonopoulos resists pigeonholing his band as “industrial metal.” “Those kinds of bands often lack songwriting skills and melody-driven vocals,” Seven offers. “What we’re trying to do is meld the Ministry/Skinny Puppy vibe with amazing songs. Ideally, I think about taking the drum sounds from Depeche Mode and applying them to heavy music.”

Opiate’s latest release, Manifesto, features plenty of Seven’s immaculate 16th- and 32nd-note kick drum grooves. But he admits that he also “really went out there on this record” to show a different side to his playing. “For the song ‘Dead Underground,’ we came up with the beat quickly,” he says. “But I was playing the hi-hat very straight, and Jimmy [Kaufman, guitarist/programmer] suggested that the song needed something extra. I decided to take a different approach and give it a more layered, almost jazz-fusion vibe.

“I do listen to The Mahavishnu Orchestra and Terry Bozzio’s playing with The Brecker Brothers,” Seven continues, “so we all got really excited about going in that direction. I put in a jazz-influenced hi-hat pattern, and by the time I was done programming it, I was thinking, ‘How am I going to play this?’[laughs]. It’s in five, then switches to four, and then goes to seven. I listened back after tracking it, and I impressed myself that I could make it work.”