A couple of years ago, legendary art-rock pioneers King Crimson were asked to share the bill with modern day prog-metal masters Tool. More recently, Tool invited young “art metal” explorers ISIS to tour with them. This speaks volumes of the impact that the cerebral metal quintet is having on the ever-expanding metal scene. In its nearly ten-year existence, ISIS has grown from an angry, loud metal band to a dynamic, musical entity, capable of beautiful, mysterious, and maddening soundscapes that can inconspicuously morph before your ears, from one end of the sonic spectrum to the other and back again.

The band’s new release, In The Absence Of Truth, reveals a more mature overall sound, due in part to the thoughtful melodic drumming of Aaron Harris. While touring with Tool, Harris was inspired by drummer Danny Carey. The self-taught Harris has always taken a minimalist approach to the more complex odd-meter material–until now. “Danny Carey turned me onto the drumming of Bill Bruford,” explains Harris. “Once I started checking out what Bruford was doing, and how he was constantly creating new musical ideas on the drums and exploring unique drumset configurations, it inspired me to open up my playing and explore different drumming concepts for our new music.”

Harris considers himself to be a dynamic player and feels that his role in the band is to help set the mood and lay the groundwork for the atmospheric layers of guitars. He is also involved in a virtual band called The Los Angeles Digital Noise Academy. Composed of about fifteen musicians, member of The LADNA transfer, download, record, and edit musical tracks to create songs in the virtual world, without ever seeing one another face to face. The LADNA music is scheduled for release on artist/producer Ken Andrews’ Dinosaur Fight record label in early 2007. 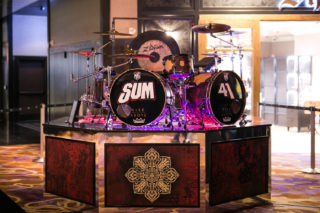 On The Beat with Frank Zummo of Sum 41: Talks “Rise Above” Drumkit Display