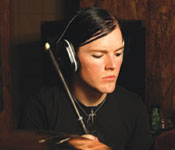 Trevor Friedrich’s band Eighteen Visions (Epic) has just released their self-titled sophomore opus, a mishmash of heavy meets melodic, which then meets metal. Friedrich’s drum sounds are Bonham-esque, spastic, and fresh. But what sounds like a drench of reverb throughout the disc isn’t the case at all. “None of the drum sounds have any effects on them,” Friedrich insists. “It’s all just different rooms and sounds. If we wanted a different feel for a breakdown or a soft technical part, we would change everything up, with different kits or snares in different rooms.”

Truth be told, the entire recording process for Friedrich turned into a heavy learning experience. “The only recording experience I’d had before this record was in my friend’s room,” the drummer admits. Then, when the producers of the Eighteen Visions disc told him they wanted to split up recording the drums and the cymbals to get more separation, he was taken aback. “At first it was very weird,” Trevor says of the near air-drum experience, “But the groove got tighter because I really had to concentrate. What I had to do was focus on the exact parts that went into each song. During the ‘cymbal session,’ I was sitting there playing along with only cymbals in front of me.”

The cut “Black And Bruised” leans on a heavier style. “I really love when I just beat the heck out of my drums,” he says. “There are literally three separate drum parts on that song that I get to take out my aggression on, and that’s what I like.”