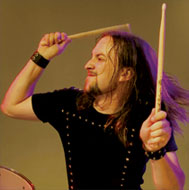 Around the middle of last year, Disturbed began touring behind the new album, Ten Thousand Fists, and they’ve been out on the road, nonstop, ever since. Drummer Mike Wengren says it comes with the territory. “After ten years with the band,” he says, “we’re happy to be so busy.”

When asked how Disturbed goes about creating material, Wengren says, “When we record, the band isn’t really trying to go in any specific direction. It’s always just about us getting together in a room, away from distractions, and interacting and playing music together. Nothing is preconceived. Danny [Donegan] begins playing a guitar riff, and we work on a rough structure of a song. It builds from there.”

On the whole, Wengren says the band needs a solid foundation from him, and good meter. “And then it depends on the style of music. But no matter what the style, number-one has to be meter. I have to be solid.”

Considering that Ten Thousand Fistsdebuted at number-1 on Billboard’s Top 200, Wengren is elated at the band’s success. “It’s been an unbelievable ride. It sounds corny, but I swear I wake up every morning and I have to pinch myself.”