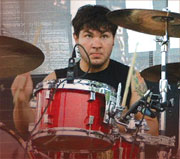 The members of Every Time I Die are “lucky to be alive,” says their drummer, Michael Novak Jr. While touring earlier this year, the innovative metal-core band was driving through mountains in Wyoming when their van skidded on a patch of ice and flipped over. “I woke up to someone yelling, and I was flipping backwards and hearing smashes,” Novak recalls. “The trailer carrying our equipment jack-knifed the van, and we tumbled. It could have been worse. We could be missing someone right now.” Novak reminds us that drummer John “Beatz” Holohan, of the band Bayside, was killed in a van accident “on pretty much the same strip of highway.”

Although no one was seriously hurt during E.I.D.’s accident, Novak sustained a minor shoulder injury that luckily hasn’t affected his playing. “It gets really sore when I move it in weird positions,” he explains, “like when I sleep on it funny. But I’ve been perfectly fine to play.” Playing drums also might have helped him avoid a more serious injury, he believes. “Maybe the motion of drumming had something to do with it.”

Despite the setback, E.I.D. were able to finish touring their fourth album, Gutter Phenomenon, an adrenaline-fueled mixture of hardcore, screamo, thrash metal, jazzy nuances, Southern grooves, and raw, upbeat rock ’n’ roll. On “Champing At The Bit,” Novak offers a slew of odd time changes, yet for the most part, “I wanted to keep more of a meat & potatoes vibe on this record,” he notes. “More beats than technicality, I guess. I’m pretty rock-influenced. I feel that AC/DC’s Phil Rudd did it right.”

Novak has also tackled his fair share of technical, “all-over-the-place” drumming, but his stripped-down approach is an indication that “we’ve matured.” Complementing his style is his trusty four-piece Pork Pie drumkit. When it comes to gear, he says, “I feel simple is better. I don’t use double bass.”