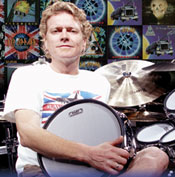 Rick Allen says the great thing about Def Leppard’s new album, Yeah!, is that the band didn’t have to spend time writing new material. Instead, they decided to record a selection of ’70s cover songs.

“We were a ’70s band,” Allen says proudly. “There were mounds of cover songs we wanted to record. But we didn’t want to do the obvious ones. The songs on the record are known, but they’re not necessarily massive hits.”

Rick admits that “Hell Raiser,” a tune originally recorded by Sweet, was the most challenging for him, given his physical capabilities. “That one took some time for me to work out,” says Allen, who lost his arm in a car accident twenty years ago.

Rick says that recording is a lot easier today than it was back when Def Leppard first started. “It’s much easier to map out a song now using whatever technology you can,” Allen explains. “I can also go back in after the fact and re-punctuate or change something. In a perfect world, it’s great to be able to do a take from start to finish. The way that Def Leppard makes records today is very disjointed, which can be the downside of technology. It’s not like it used to be.”

Rick and Def Leppard are currently on tour supporting their new release.