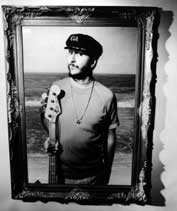 Les Claypool sat down with MD Online to discuss an impressive partner in rhythm, his new bandmate in Oysterhead: Stewart Copeland.

MD: How did you first hook up with Stewart?

Les: When we were working on the Primus Antipop record, we approached different musicians we admire and respect to produce different cuts on the record. Stewart’s name came up—not so much for his Police stuff, but because of Rumblefish and The Rhythmatist. We contacted him and he was excited about it, and he came and did it. We became friends.

So we jammed with him at SIR. His drums showed up before he did, and we were all sitting there freaking out looking at his kit—because, you know, it was Stewart Copeland’s. And I even got to play his drums.

So anyway, he showed up and we played, and it was a pretty incredible experience.

MD: So you got Trey involved and played a show in New Orleans last year. Is that how the Oysterhead project come about?

Les: I was asked by Superfly Productions to put together a jam for their Superjam. I called Trey, and Trey said, “You know, I’ve always wanted to play with Stewart Copeland.” I said, “I know Stewart!” So we got a band together.

MD: When you three got together, was it your songs, or Trey’s songs, or did you collaborate?

Les: We just jammed. When we did the show in New Orleans, we got together for three days prior and came up with seven songs.

MD: How does Stewart like to work in the studio?

Les: His feeling is generally that the first take is the take. He likes the emotion of discovery. He hates rehearsing songs over and over with a passion. So we didn’t do too many takes. We’d play it, and that was it.

MD: How is your bass playing influenced by Stewart’s playing?

Stewart and I have talked about this. Stewart was a huge influence on me as a musician. I play drums as well as bass, and when I go to see a band, the first thing I look at is the drummer. His approach to music, rhythm, and phrasing—a lot of that is translated to my bass.

MD: It’s safe to say that he doesn’t play like anyone else you’ve played with before. Did that change your style of playing?

Les: I can tell you about the first time I played with him. He’s one of these guys who looks at the bass player. So here I am playing with Stewart Copeland for the first time, and I want to watch him play, because he’s Stewart Copeland. But every time I look at him, he’s staring at me with this eager look. So I couldn’t look at him! I kept looking down at my bass. So eventually I moved over to the side, where a cymbal was hiding his face, so that I could watch his hands and watch him play.

Whenever you’re playing with a new musician, you have to change your approach to your instrument. That’s sort of a given. You feel out the situation and away you go. Stewart listens to melody more than the rhythm of the bass. If you listen to a lot of the stuff he’s done, you’ll notice that his fluctuations come with changes in the melody, whether it’s the guitar or even the vocal part. He’ll play right along with the vocal part—it’s amazing. So I tend to follow him a little more.

Stewart also plays traditional grip, and his accents are amazing. He sat down on our drummer’s kit [during a Frog Brigade show] and sat in. He’s playing along, but as soon as he hits those accents, it’s like the kick drum is leaping off the riser. It’s not like he’s a bashing player. In fact, he doesn’t really hit that hard—but he hits his accents incredibly hard. From my experience, most players who have gotten to the point where their instrument is an extension of them, their personalities come out of their instruments. Stewart’s a very passionate person. Consequently, he’s a very passionate player.