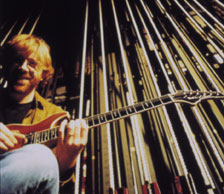 MD Online caught up with Trey Anastasio to get his thoughts on his new band, Oysterhead, and to gain some insight to the singular Stewart Copeland.

MD: What were you thinking the first time you played with Stewart?

Trey: He was better than I could have imagined. He’s the most enthusiastic drummer I’ve ever heard. He’s bound and determined for the track to be great.

MD: Did you grow up listening to Police tracks?

Trey: Oh, definitely. When I was in high school bands, we played lots of Police songs. I was a drummer at the time, actually, and other than Bonham, he was my big hero. He was the guy.

MD: And now you’re playing with him. How great is that?

Trey: It’ as great as I would have expected it to be, if not greater. This is a big statement, but I really think that this band was a good opportunity for him to play. It’s just so wide open. It’s turned out better than I dreamed.

MD: The bands that the three of you are most known for are so completely different. What in the world does this music sound like?

Trey: Well, what was so interesting about it was that I didn’t know what it sounded like until about a week and a half before the whole thing was done. People kept asking me that. We were up in the barn for a month, and we went in there with virtually nothing. We just walked in the door, put on a pot of coffee, and started talking and jamming and writing songs together. It was a great experience in the sense that I don’t think anyone felt any pressure.

This kind of amorphous blob of music came out, which we got on tape. But it seems that everyone kind of dropped their influences and met in some common, center place that was new to my ears.

MD: Specifically, what did it feel like to play with a drummer who has such a forceful presence? [Phish drummer] Jon Fishman is a great drummer, but plays with a much different vibe. How did Stewart’s style change how you played?

Trey: I just played the album for a friend, and he asked, “Did you get a new amp for this?” I said, “No, everything’s the same – same gear.” He said he thought I sounded completely different from the way I normally do. The influence of having Stewart there made me play in an utterly different way – and I think Les did, too.

Trey: Stewart’s an amazing listener, and that’s all over the album. All of these little moments, with these stops and starts. For a guy who talks about how much he hates jazz – like loathes jazz and everything that has to do with it – he listens better than just about anyone I’ve played with. He’s tuned in. Like when I’m playing a guitar solo, he’s completely focused. That isn’t what I expected. He’s reacting musically. There are parts where the groove is rock solid, and yet there is all this invention going on.

MD: Where do you think the “new inventions” come from?

Trey: I think they came from his spending the past fifteen years writing orchestral music. He’s very musical. He’s been doing it for so long that I can hear it in his drumming, that sensibility. There’s only three of us, but the drums themselves occupy this whole sonic spectrum.

MD: What was it like, when he was getting back into it for the first time?

Trey: The only thing I noticed was that he had to get in shape. He played with such intensity – we would play for ten minutes at first, and he had to take a break. He would want to stop. But that ten minutes was unbelievable. He just absolutely puts every ounce of his being into it.

And I’ll tell you another thing: We produced this ourselves, and he’s exactly the same way when it comes to producing – passionate. Everything is done with passion.

MD: Les mentioned that there were a lot of first takes.

Trey: I don’t think we did more than two takes of anything, and that was a little frustrating to me at the time, because I really like to play. If I had my way I’d just play forever [laughs].

But you know, you learn things. I think it sounds super fresh. My tendency would have been to go back and fix all the guitar notes, but I ended up just leaving them. As time went on, I started listening to the stuff, and it stays fresh. That’s what those Police albums sound like to me. You put on those first couple of Police albums, and they’re so fresh.

MD: Stewart and Les as a rhythm section is a pretty heavy thing. What was it like looking at those two playing together? What in the world were they laying down?

Trey: Probably the biggest eye-opener to me was how much Stewart was locking into the guitar, and that Les was changing his style in a cool, thoughtful way. By the end of the project he probably improved. He was already one of my favorite bass players, but he improved a lot just from playing with Stewart.

MD: The Police weren’t about guitar solos, but playing with you in a jam session – this is a rare instance of him backing up a soloist.

Trey: That’s exactly what I’m getting at! What was amazing was how good he was at doing that. I’ve played with a lot of drummers who do that, because that’s the world I come from. But Stewart was completely blowing my mind. He was right behind everything I was doing, totally pushing me, in the same way that he was so supportive of the songs that Sting wrote. We were in a situation that was more jam-oriented, so I never could have anticipated this – especially from somebody who comes from sort of a punk background, where long songs or jams are considered sort of pretentious. I’ve played with jazz drummers who don’t listen as well as Stewart – many, many of them. You’ll hear it on the album, I’m telling you.