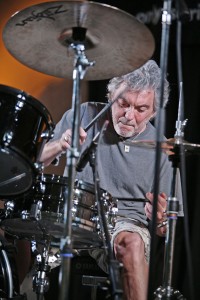 There’s a whole lot of drumming going on. Hundreds of thousands of people currently play the drums. Through the years, perhaps millions have played. But in spite of all that drumming, just a couple of dozen amazing innovators have shown us the way. Of course, Steve Gadd is a member of that group, but he’s also a member of an even more elite bunch; Steve is one of the very few drummers whose innovations changed the way other musicians heard music.

Gadd first came to national attention in the early 1970s through associations with such jazz luminaries as Chuck Mangione and Chick Corea. But he quickly established pop and funk credentials as well with artists such as Paul Simon (his innovative drum part on Simon’s “Fifty Ways To Leave Your Lover” became his best-known showcase) and the band Stuff. Gadd soon became one of the busiest drummers in New York, and the hundreds of albums he appeared on inspired legions of young drummers to aspire to careers as studio musicians.

Over the past decade, Gadd has spent a lot of time on the road, doing major tours with Paul Simon, James Taylor, and Eric Clapton. He continues to appear on notable albums, such as Simon’s You’re The One (2000), Clapton’s One More Car, One More Rider (2001), Taylor’s October Road (2002), and David Sanborn’s Time Again (2003). Due out soon are DVD and CD versions of Corea’s “Three Quartets” band recorded live.

Gadd was recently in the studio with Clapton, and will be touring with the guitar legend shortly. Also recently released are DVD versions of Gadd’s classic instructional videos Up Close (1983) and In Session (1985), and in September Gadd was honored by Zildjian with an American Drummer Achievement Award. (A Gadd tribute DVD that ties in with the event will soon be released by Hudson Music, who also included a recent performance by Steve’s band The Gadd Gang on the Drummers Collective 25th Anniversary DVD.)

In the past, Steve has tended to let his playing do the talking. Steve’s openness, and the insights he shares in the following interview, may well change the way we play and hear music yet again.

MD: I was a freshman at North Texas State in 1972, and my teacher was John Gates, who had been in the Army with you. He told me, “There’s this guy that nobody knows about named Steve Gadd, and he’s something else.” That began my search for your recordings. Chuck Mangione’s Alive was the first record I heard you on, and the groove was incredible. Your solos on “High Heal Sneakers” and “St. Thomas” have the clarity of Max Roach, and there is an incredible fluidity and a contemporary slant. Do you recall what you were listening to and practicing at that time?

Steve: That was done right after I moved to New York. I had just gotten out of the Army, and before that I was in school. My main background was listening to guys like Gene Krupa, Buddy Rich, Max Roach, Elvin Jones, Philly Joe Jones, Tony Williams, and Art Blakey. Then I got to New York and started hearing some funk players, so I started to concentrate more on the groove than on the freedom of straight-ahead stuff. One of the first guys I heard that had a really great groove was Rick Marotta.

MD: So he was established before you?

Steve: We both got to New York around the same time. But he grew up with a different background—more of a backbeat thing—and he had a hell of a pocket. Still does. So having come from the kind of background I came from and then hearing that groove, I was inspired to technically emulate those jazz guys but to put some of that stuff in a great pocket.

MD: I hear that in your earliest recordings. How did you develop that deep, relaxed pocket?

Steve: I think it’s a matter of being aware of it and trying to do it. No matter how “out” and over-the-bar whoever you’re trying to sound like did it, the challenge is to try and do it in a way where you’re paying tribute to what they did but that is understandable in terms of a groove.

MD: Did you have a method for practicing that?

Steve: No, it was just a matter of being in a situation where I had the chance to record and hear it back. That’s a tremendous education right there, because there are a lot of things you do in the studio that get very creative and exciting, and you think they sound great, but on playback you can tell it’s jumbled up and not easy for the listener to understand. So you go back and simplify some things and you find out that it’s a lot more understandable when you leave some space. So being in the studio and hearing things back was a good education. And then years later, when they started using clicks, when things got exciting you could tell where you got away from the click. So those were ways of testing yourself and trying to develop the pocket.

MD: Your playing is highly supportive and highly interactive. But there’s also a transparency. Although the playing may be busy, it doesn’t create interference.

Steve: When you’re playing high-energy music in the studio, a lot of times when the soloist gets busy, everyone gets busy. I’ve learned that that’s the time to not get busy and just be supportive. When he takes a breath, that’s a better time to play something in terms of being a support player. You have to pick and choose your spots, sort of like filling in the blanks.

MD: I was in the studio once in the early ’80s watching you do a Dave Liebman record called What It Is. I remember the rhythm section putting down a track, and then Dave put a saxophone solo on. The groove was kind of static, but he played on top, behind, and all around the time, and it was a really interesting contrast. Mike Mainieri was producing, and after Dave put his solo on, I remember Mainieri saying that something was missing. You said, “I have an idea.” You went in and made a pass that corresponded to the saxophone solo. Do you remember that?

Steve: I remember working with Dave, but I don’t remember that particular session. What condition was I in?

MD: At that time you seemed to be burning the candle at both ends. You were playing sessions all day, and then I remember you playing at Mikel’s all night. It seemed like an amazingly stimulating but exhausting period.

Steve: Yeah, it was a great period, but it was pretty exhausting. So I don’t remember that particular session. How did it come out?

MD: It came out incredible. You did exactly what you were just describing: following the emotional path that he was on, but not talking when he was talking, so to speak.

Steve: I’ve found over the years that the feel overcomes everything. If you get a good groove happening, that carries it along. If it feels good, there’s not a lot you have to do. You can pick and choose your spots to dynamically respond to what’s going on, but you don’t have to technically, constantly challenge yourself to fill in those spaces.
When you play live, it’s another ballgame. People can see the excitement, and that helps them put it together with the audio. When you don’t have that visual thing, it’s better to keep it simple. It’s a lot more understandable.