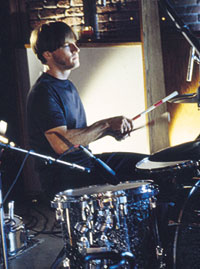 Power-pop trio Fastball – bassist/singer Tony Scalzo, guitarist/singer Miles Zuniga, and drummer Joey Shuffield – are clearly excited to have contributed their version of “The Real Me” to the new Who tribute, Substitute, The Songs Of The Who.

“This record was a no-brainer for us,” explains Shuffield, “because we are all enormous Who fans. Keith Moon embodied the spirit of rock ‘n’ roll like no one else – he lived it, breathed it, played it. It was his life.”

“Keith was a unique drummer,” Joey adds. “There’s really no one who can play like him, so I didn’t even try. But I was channeling Keith’s spirit when we recorded it.”

Like most of Fastball’s recordings, the drum track for “The Real Me” was recorded live in an open room. “We cut the song pretty quickly in a small studio in Atlanta,” Joey explains. “The song is basically just bass and drums soloing for three minutes. Right before we recorded the track, Tony and I rehearsed it to make sure we knew it, which was a huge mistake. I wish the recording button was on, because those first passes were awesome. I wasn’t really thinking about it.

“I find that’s always when you get your best take,” Joey elaborates. “You get this feeling like any second you’re going to screw up, which is kind of what we wanted for this track, sort of teetering on the edge of totally falling apart. We banged right through it. Tony and I played live and we nailed it again, so it really was one take. Later we overdubbed Miles’ guitar and some horns.”

While we had the opportunity to speak with Joey about recording the Who track, we asked him to talk about the making of the latest Fastball CD, The Harsh Light Of Day.

Joey: One thing that’s different between this record and our last one is that I spent a lot more time with the demos this time, even before pre-production. I was training for a marathon, so before I’d run, I’d listen to one or two songs from the demo, get it in my head, and while running, I’d meditate on it and think about what I wanted to play on it. Then I would take it a step further when we got into pre-production by recording every day for two weeks. I would take the tapes home at night, listen, and pick out the drum bits I thought were good.

MD: When Miles or Tony give you the demos, are there acoustic drums or drum machine parts on it?

Joey: It depends. Tony sometimes lays down a basic beat and then lets me play what I want. Miles sometimes has a little more. Miles and I worked together a lot on his songs. We rented out a rehearsal room and he had just bought a sampler, so we played around with it. That may be old hat for some [laughs], but for us it was new.

MD: Did you find the sampler inspiring?

Joey: I liked it because it helps you look at the structure of the song and how you can move things around. I treated it like another instrument. It was almost like playing with another bandmember. The tracks “Goodbye” and “This Is Not My Life” were definitely sample-oriented, as far as pre-production.

MD: So you were using the sampler for loops?

Joey: Yes, we came up with the whole structure from playing with the sampler. On “Goodbye” I’d play a beat, we would record it, and then I’d edit it down so it fit together. Then I’d loop it to check how it felt. If it didn’t work, we’d go back and try something else. This was how we got the basic feel of the song. The track “Funny How It Fades Away” changed a lot. There were a lot of ways I could have approached it. On the day we recorded it, I had a very strong idea of what I wanted to play. I’m particularly proud of that one because I nailed it in one take.

I thought the track “Vampires” came out great too. It was late at night and we were tired. We turned the lights down to get a vibe happening in the studio, and we ran it down to see how the drums sounded. Miles started it off and something special just happened – we just nailed it, the three of us together, vocals, everything live. I was glad it got captured on tape. Sometimes that happens and the tape is not rolling, or right in the middle something happens. But we really captured that track. Everyone was right on; it has this special quality. I like recording that way. You get that spontaneity in the studio. Later we overdubbed the strings.

MD: How about the track “Morning Star”?

Joey: That’s a major in-your-face rocker. That song always goes over live. I sit really comfortable with songs like that. It fits my style very well.

MD: How do you record your drum tracks?

Joey: I like the drums out in the open. The larger the room, the better the drums sound. For this recording I had two kits set up. One was set up as a rock kit, the other was more toned down. I don’t really like to muffle the drums, I like the ringing. When we record, I really need to have Tony and Miles playing live with me. I like them close enough for eye contact, so we can interact. I’ll have a click, but I prefer for them not to hear it, so in case I play around with the beat, a little ahead or behind, I don’t want them to be distracted. It’s a feel thing for me. I need to hear bass, and I try to get them to sing too. It’ very important. I usually do no more than two or three takes.

MD: What equipment do you use?

Joey: I play Pork Pie drums and Zildjian cymbals – 14″ hats, 20″ ride, 18″ K and A crashes. I use Remo Ambassador coated heads on all the drums and a clear PowerStroke 3 on the bass drum, and I play Zildjian Super 5B sticks.

MD: Let’s talk about your tuning.

Joey: I like my snare between tight and loose. There’s a certain pitch I look for. I know when I have it when I tap my finger on it. I don’t tune to any one note, I tune to the drum. There’s a certain point when you get a full response from the drum, and I know it when I hear it. Then I’ll go around to fine-tune. It’s a pretty basic system, but a lot of that has to do with my kit? it practically tunes itself!