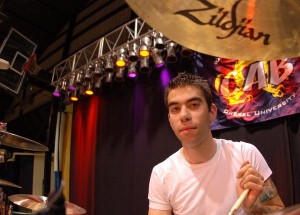 Cyrus Bolooki doesn’t take life or fame for granted. In October of last year, while on tour with his fellow New Found Glory bandmates–vocalist Jordan Pundik, guitarists Steve Klein and Chad Gilbert, and bassist Ian Grushka–Bolooki had a freak accident. “We had finished a show in New York City,” he recalls, “and at the end of the show all the lights went out as planned. Unfortunately, there was no barrier on the back of the stage, no railing or anything. I got off my drum riser and proceeded to walk to the left side of the stage–or what I thought was the left side of the stage–and actually walked off the back of the stage. I fell about thirty feet and landed on my left arm, breaking it in half and breaking three bones in my back. That night I didn’t think I was ever going to be able to play drums again.”

Not knowing what the outcome would be made Bolooki all the more determined to get back to playing as soon as possible. “I had amazing doctors in Florida who really helped me out,” he says. “They used ultrasound therapy, which is kind of new. They use it on athletes. I was in physical therapy for less than two weeks. I actually started moving my arm and lifting weights with a cast on at that point. Two weeks after I got my cast off I started playing again.”

Trying to build back his chops was a little scary at first for the young drummer. “I sat down and didn’t know where to start,” Cyrus admits. “I didn’t know if I was good anymore or if I could do anything. I went in the practice studio, took headphones and a CD player, put on my favorite Blink-182 CD, Enema Of The State, and started playing along. And by the end of the week I knew how to play the whole record. And then when I wanted to challenge myself as far as endurance goes, I put on an MXPX or NOFX record. I’d try playing through the whole thing without stopping. It was tough. I played along to all my favorite bands’ records. Eventually I played along to our record, just to see if I could remember it.”

After working hard every day for several weeks straight, Bolooki had his confidence back. “At that point I think I was playing better than before,” he says. “It kind of made me think, There’s a reason why I play drums. There’s a reason why breaking an arm or my back didn’t stop me. Nothing can stop me from doing this. That’s kind of what’s in my head now. I enjoy everything four times more than I used to.”

The infectious, catchy pop-punk sound of New Found Glory was first created in 1997 in Coral Springs, Florida. Known for their rigorous touring schedule, the band only took time off in the last few years to record their major-label self-titled debut and the newly released follow-up, Sticks And Stones. (That disc recently made a surprise entry at number-4 on Billboard’s Top-200 album chart.)

Last year New Found Glory played ten shows on the Vans Warped tour before heading out on the road with Blink-182. This year the band went out for the entire Warped tour, and loved every minute of it. “The tour was unbelievable,” Cyrus says enthusiastically. “I even got the chance to sit in with some of my favorite bands.”

Listening to Cyrus play, you’d never expect that he’d only been playing drums for a relatively short time; he plays at a level well beyond what you would expect from a relative newcomer. We’re talking about a solid player with a great future.

MD: When did you start playing drums?

Cyrus: I started kind of late, when I was fifteen years old. So it’s been about seven years now. Most people think I’ve been playing a lot longer. My first instrument was guitar. I’ve been playing guitar since the age of ten. When I got into high school and started hanging out with friends that were into music, it always ended up that there were guitarists and bassists, but no drummer. So I started playing drums. It was kind of out of frustration. [laughs]

At the time the only drummers we could find were people who were in the marching band at high school. So there were people who could show off their rudiments, but as far as drumset goes, they didn’t know too much. So I just said, “Okay, I’ll play.”
At that time I was listening to a wide variety of music. I was into Metallica, Pantera, and a lot of metal stuff. But the drumming was too hard for me because it had a lot of double bass. That’s when I started getting into more punk and whatever was on the radio. I would play anything, from Rage Against The Machine songs to NOFX songs, which were way too fast for me. But I would try anyway.

MD: When you play fast now, you’re so clean and precise.

Cyrus: Thanks. Actually, on Sticks & Stones, I think one thing that has really helped me in the last year and a half has been practicing to a click track. I’ve really gotten into it. It’s helped me to stay focused as far as tempo goes. Now when I get up on stage to play, it’s very natural for me to keep a fast tempo going.

MD: Did you ever take formal lessons?

Cyrus: No, and I’m kind of bummed that I didn’t, because now I find that I’m going back to the basics and trying to teach myself. If I had time, I would go out right now and take some lessons. But with being on tour as much as we are, I can’t. But I have been buying every book and DVD I can find on drumming, trying to see if I can learn from them.

It’s really frustrating for me at times, because I know I can get up there and bust chops on the drumset. I may not be able to do stuff that a five-year-old kid whose been taking drum lessons for two months may be able to do, but that’s stuff I have to learn because I never did it when I was younger. I learned how to play a drumset, but I never learned some of the finer details of drumming.

I’m also realizing how much of an impact learning rudiments and learning the fundamentals of drumming really makes on my drumming now. Having those fundamentals together makes a lot of stuff easier. It also makes me understand what other drummers are playing. I’ll listen to something, not know what the guy is playing, then I’ll learn a rudiment and listen to that same music again, and it’ll be like, “Oh, he was doing that rudiment the whole time.”

MD: So what do you practice these days?

Cyrus: Well, the one thing I think is probably the best practice–and can’t be substituted for–is the fact that our band has been playing shows non-stop. I mean, being on tour ten months out of the year and playing drums every day does a lot for your drumming. You can’t beat that.

I’m also huge on warming up before I perform. I know that if I don’t warm up a muscle and then try to move it, there’s no way I can move it as well. I try to warm up each hand individually just by moving and stretching it a little bit. Then I’ll start doing some rudiments and rolls.

MD: What drummers inspire you?

Cyrus: My biggest influence right now is Travis Barker from Blink-182. He’s amazing. We were lucky enough to go on tour with Blink for two months last year. To be able to see Travis play drums in concert and at soundcheck was a great experience. I learned so much from watching him every day.

MD: You can’t beat those kind of lessons.

Cyrus: Oh man, I learn best by watching. I then kind of imitate what I see. Eventually it becomes my own thing. I was playing Travis’s fills note-for-note in our music. But after a while they kind of morphed into my own thing.