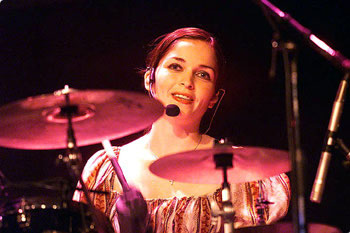 The Corrs formed in 1991, and broke big in the States in 1994, when they were invited by the American ambassador to play at the World Cup in Boston.

The band’s debut, Forgiven, Not Forgotten, quickly became an international hit, making it one of the most popular debuts ever by an Irish group. Since then, The Corrs have gone on to sell over 30 million records around the world. Now Ireland’s favorite sibling band is back with a new CD, Borrowed Heaven, on Atlantic Records.

MD Online caught up with drummer Caroline Corr while the band was in Dublin doing some pre-show promotion before heading out on tour. This time around, the road trip will be a completely different experience for Caroline, who will now be singing and playing percussion.

Caroline: It’ going well. We’re doing a couple of shows here in Dublin. We’re about eight shows into our tour, which so far has been great.

MD: Congratulations are in order as well. You had a baby not too long ago.

Caroline: Yes, thank you. He’s sixteen months old now. It’s been crazy trying to tour with a baby. But it’s actually working out okay. Also, at the moment I’m pregnant. I knew I was going on tour, and I was like, “Okay, what am I going to do?” Because, I’ll be six months pregnant when I’m in the middle of the tour. So I had to think ahead about what I’m going to do on stage. I knew that it would be too physically demanding to be up every night playing a two-hour set on drums. So I thought, for now I’ll switch to percussion and do the piano on stage. So we’ve brought in another drummer to help. It’s working out great.

Caroline: His name is Jason Duffy. He really fits in, and it sounds fantastic. It’ a bit of a change for me. When you’re the drummer in the band, you’re doing so much more and you’re constantly on. It’s not like you can take a break. You’re the backbone of the band, so there’s just no rest. This is kind of different for me, because percussion is not as demanding and I’m kind of supplementing the whole thing. So it’s kind of strange. I’m moving around more on stage, and I play this big Irish drum called a lambeg drum, which you might have seen in River Dance. I do vocals as well, and it’s been nice to move around the stage a bit more and do more things.

MD: When did you start playing drums?

Caroline: I started quite late, actually, when I was about seventeen. I had a boyfriend who played drums, and he had a band room next door to where we were making our music at the time. He was a big U2 fan, and he loved Larry Mullen. He showed me a few beats, and I just kind of got into it and started playing. The next thing I knew I was on tour playing drums and going, “Oh my God!”

MD: I hear Larry’s influence in your playing.

Caroline: Do you? That’s cool! That’s not too bad. [laughs]

MD: Were your brother and sisters already playing?

Caroline: Yes. And I’ve played piano since I was little, so I was originally the piano player in the band. We didn’t have a drummer, and I kind of took to it pretty fast and really liked it, so we thought, ‘This is perfect.? It was the very beginning of the band and I was quite young at the time, so we just thought that this could work, and it did.

MD: So you had musical experience from playing piano.

Caroline: Well I had a musical background, but I still didn’t know a lot about drums at the time. I really didn’t even have time to get that many lessons, to be honest, because I was suddenly on the road. I was kind of thrown in the deep end. But that wasn’t a bad thing when I look back at it.

MD: It was sink or swim.

Caroline: Yeah, absolutely. I remember my first show was a live TV show in Ireland, and I was just petrified. It was horrific. [laughs] It was just such a new thing to me. But it was okay, at the end of the day.

MD: Did you ever take formal lessons at all on the drums?

Caroline: I had about ten lessons. I took a few before we went on tour and were signed to a record label. But I didn’t have time to do that much because we were suddenly out on the road.

MD: What drummers were you influenced by?

Caroline: Well, I was listening to all the amazing drummers like Vinnie Colaiuta. But I’d listen to them and go, “Oh my God!” you know? It’s ridiculous. [laughs] There was no one in particular I really tried to copy. I listened to a lot of bands that were happening at the time, but no one in particular. I was just kind of doing my thing with the band and whatever fitted into our music.

MD: Do you contribute to the songwriting?

Caroline: Oh yeah, we all write. That’s what’s great about when you have basics in piano. A lot of the songs are written on piano or guitar, so I contribute, and I have done so since the beginning. So it’s been good to be involved completely musically as well.

MD: You mentioned Vinnie Colaiuta. Is there anyone now that you appreciate?

Caroline: I do like to look at female drummers, because I am one. [laughs] I love Cindy Blackman, I think she’s an amazing player. And she’s got the whole image going. It’s simple, nothing crazy, but she’s just really solid.

MD: Did your parents play any instruments?

Caroline: Yes, my mother was a singer, and my father played piano and keyboards. They were in a band together, though they also had regular jobs because they had kids and stuff like that. So they kind of did it as a sideline, but they loved it more than their regular jobs. That was kind of what we grew up with: them going out on the weekends and gigging. They listened to everything, but it was a lot of melody-based stuff at the time. They did a lot of covers of The Eagles, The Carpenters, and Simon & Garfunkel – all that sort of stuff. So we grew up listening to a lot of that. And I think that’s kind of where a lot of the melody in our music stems from.

MD: Any favorite songs that you like playing live?

Caroline: I like playing “Angel,” from the latest album. It’s very energetic. That’s going to be the second single.

MD: Take us through the recording process. Do you create the loops yourself?

Caroline: No, our producer Olle Romo is a drummer himself. He played with the Eurythmics years ago. He also worked with Mutt Lange. Olle gets this great sound with a mix of live drums and loops. That’s kind of what we’ve done from the very beginning, and it’s always worked for us. We go in and I do my thing, and then we supplement it with whatever we want. He’s great because he gets a really great sound as well. He really understands drums. He understands dynamics and how to make it really big. He worked out really great for us.

Caroline: Olle worked with Mutt for years, and Mutt said to us, “I’ve got this great guy. He’s worked with me before and I think he’d be great to work with you guys.” And we thought, Yeah, let’s try it. And as soon as he came in and worked on one of our tracks we were like, “Wow, this sounds great.” It really worked. He’s brilliant, and you can learn from him. He’s really easy-going as well.

MD: How do you come up with your drum parts? Do you know what you’re going to play before you go into the studio?

MD: How do you record the drums?

Caroline: Separately, and then we put them into Pro Tools so that we can move them around.

Caroline: Yes, we record practically everything on Pro Tools. It’s great! If you want to change a section, or move a section, Pro Tools is great for that.

Caroline: Oh yeah, always. I play to a click practically all of the time – on stage as well – except for the Irish songs. We play our Irish songs a bit more loosely.

MD: Do you prefer headphones or in-ear monitors?

Caroline: In-ear monitors. Years ago I used to have these big uncomfortable headphones. [laughs] It was awful. Instead of feeling like you’re on stage, I’d feel like I was in a studio the whole time. It just doesn’t feel as good. In-ears are fantastic. They really make it very tight on stage.

MD: What size room did you record the drums in?

Caroline: We recorded at a very small studio in Dublin. There’s nothing fancy about this place at all, believe me. [laughs] It was just a small room.

MD: Did you use the same drum setup throughout the recording?

Caroline: Yes. I used my own Yamaha kit, with Zildjian cymbals.

MD: Do you do your own tuning?

Caroline: I’m not the hottest tuner on the planet, so I normally get someone to come out and do it for me. Actually, the drummer we have on the road with us, Jay, is a great tuner. He comes in and does a really good job on the drums for me.

Caroline: No. [laughs] I kind of leave it to him.

MD: How did this record differ from the last one, recording-wise?

Caroline: We all write, so if someone came up with a song we’d go, “Okay, let’s get in the studio,” and we’d go in and demo it. It’s very free. We spent a long time on this album, so it was very creative in the sense that we had the time and the luxury to do whatever we wanted to do. This was before we even had Olle on board. As soon as Olle came in, it took more of a direction.

MD: Do you exercise to stay in shape?

Caroline: I’ve always stayed pretty fit. I felt I needed to give myself energy by exercising and things like that. But it’s been much harder now, having a child and now having another one. It’s all gone to hell, basically. [laughs]

MD: Do you play electronic drums?

Caroline: I have the Yamaha DTXPRESS, and I just recently got Roland V-Drums. In fact I played the V-Drums a long time ago, and we were going to use them, but I decided against it. I prefer to use the live drums. But I do use the electronics for practice. They’re great for that.

MD: Any advice for girls who want to play drums?

Caroline: I don’t think there are enough [girls playing]. I feel maybe there’s a lot of girls who don’t know enough about it. But I think there are a lot more than there used to be, which is great. There’s really no reason why there shouldn’t be more. I think the more women you see playing drums, the more women will think, “Oh, that’s not just a male thing to do.” For a long time you didn’t see many women playing. I think sometimes parents want them to play the violin or the piano because it’s more feminine, and they have this idea that drums are noisy and, “Let’s not have them in the house.” I don’t like that attitude. Male or female – if you want to play drums, go for it!