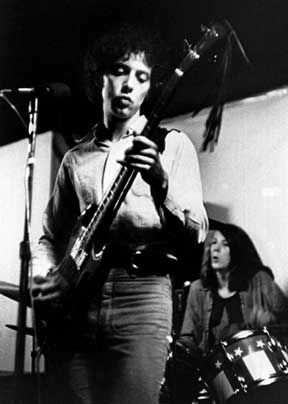 With this week’s news of the passing of singer/songwriter/guitarist Lou Reed, millions of  fans are grieving, while millions more people are learning for the first time how gargantuan an influence the New York musician and his ’60s band the Velvet Underground have had on rock music.

As many of the reports have noted, a survey of VU’s record sales would give no indication of the music’s reach or ability to inspire. A similar disconnect can be found among musicians that value physical technique over emotional substance. Though few rock musicians better understood what made a song work, or had a wider field of vision, Reed always had bigger concerns than providing a platform for chops, and the musical abilities of his collaborators are generally under-considered by the shred community.

Drummer Maureen “Moe” Tucker’s spare, tribal drum performances, for instance, are not the type of thing transcription nuts have much use for. But when it came to setting up some of the most enduring and visceral songs in rock history, Moe was peerless. Adopting a technique and setup whereby she could play the bass drum with her hands, she approached timeless songs like “Heroin,” “Sister Ray,” and “Ocean” with a unique and enormously effective system. In the new millennium, we drummers who cling to the hi-hat like a baby’s bottle would be well instructed to check out Tucker’s singular style.

We spoke with Tucker for Part 2 of this feature, which was originally posted in 2005. Here we talk with Billy Yule, who wrote an interesting chapter in the VU story by briefly filling in for Moe while she was pregnant in 1970. It was a tense time for the band, which had never gotten the record-company support it needed, and the group would soon break from the strain. Yule, brother of VU bassist Doug Yule, was a seventeen-year-old high school student at the time. It’s safe to say he had no inkling of the obsession that generations of rockers would soon bestow on the band.

In the liner notes to the reissue of the Velvet Underground’s Live at Max’s Kansas City album, you say how you were into “conventional” rock ’n’ roll when you started playing with the Velvets. What were your feelings at the time in regards to playing with the band, which was associated with the avant-garde, and whose drummer, Moe Tucker, was so unconventional?

Being a total drumming snob and only seventeen years old, I thought I was playing the “right” way. I didn’t see much difference between Moe’s style and conventional rock ’n’ roll style except for the lack of fills or a hi-hat and ride cymbal in whatever piece she was playing. Her technique left her no extra hands to work with. Later on she did take to “sit down” drumming. In fact, she did come to Max’s one night and played the second set “conventionally” on my drums.

I knew the band was kind of weird, because when I first heard of them there was only one person at my school who would even consider owning one of their records. So I felt that I was playing with someone that your average teenager couldn’t relate to. Keep in mind, I grew up with the Beatles, with their harmonies and sweet lyrics , their open arrangements: maximal effect with minimal instrumentation—pretty light and airy compared to the Velvets’ dark stories and drone-y sound, which was epitomized and cleaned up for FM radio by David Bowie in “Heroes.” Even the Beatles had at least one successful “one note” song.

The Velvets were four people who were part of a dark scene or various scenes, real or created in the interest of celebrity, and they were adults. Doug [who had replaced bassist/viola player John Cale in the band] was twenty-three at the time of Max’s. Later, when I went to play at Max’s, I was still living at home and still searching for who I was, still in high school, still living in Great Neck, Long Island, still immersed in the safety and comfort of middle-class suburbia. The core Velvets were older and well entrenched in the urban angst.

You also mention how Lou wanted to play several older songs in the second set, songs you’d not played, let alone heard. You held your own in a potentially nerve-wracking situation. How did you deal with that?

Are you a drummer? Somebody counts it in, somebody nods for the stops and starts, and a big nod for the ending, and it’s like playing along with any other song. I was probably watching Doug, who was feeding me cues, since Lou was singing. That’s how you do it.

What kind of bands had you played in previously?

In my first band, in eighth grade, we tried to play Top 40 covers like “My Girl,” “Wipe Out”— you know, three-minute teen stuff from the ’60s. That band went through several personnel changes, but pretty much stayed a rock ’n’ roll band doing covers of Cream, the Stones, Hendrix, and Johnny Winter. Meanwhile, I played concurrently in a couple of bands in the next town over. One was sort of country-flavored group leaning toward the Byrds’ Sweetheart of the Rodeo phase, and the other was an out-and-out soul band.

Do you remember what kind of drumset you played at the time?

First week, for sure: I had my basic Ludwig kit consisting of snare, bass, and three toms, in oyster black pearl. After a week or two I brought in another Slingerland bass and mounted tom, which I had painted with American flag like one of Buddy Miles’ sets. A few weeks down the road I covered the American flag drums with chrome Mylar. I most likely abandoned the American flag drums at [manager Steve] Sesnick’s basement. I still have the Ludwigs.

Who were your biggest drumming influences over the years?

My first drumming influence was an anonymous merchant marine playing the bass drum in a Memorial Day parade in Great Neck in 1956, marching right down the middle of Middle Neck Road. He had barely passed when I turned to my mom and said, “I want to play drums!” Her response was, “You’ll have to wait till fourth grade, honey!”

A year after I did start school-sponsored lessons. It was Beatlemania time, so Ringo was my next major influence. For all that people put down Ringo about lack of technique, I only wish I could have come up with even one of the deceptively simple-sounding drum parts he created on certain songs.

Later influences might be John Bonham, Keith Moon, and Charlie Watts. Doug used to say, lecture, comment, point out, harass, remind, harry me what a simple solid drummer Charlie was. And let’s not forget Ziggy Modeliste.

Are there any particular things you remember learning from your time in the studio and live with the Velvets? How much talk went on about your role in the band and what they wanted to hear from you?

Nothing much. Not all people wearing tattered black nylons and short skirts are women. [laughs] No, I don’t remember much. I remember Sterling didn’t talk to me much at all. My feeling was he wasn’t entirely happy with the arrangement. Of course he was a little distracted by his continuing education, in every spare moment. Strangely enough, I probably spent more time with Lou than anybody. And Lou always seemed complimentary. I don’t remember anybody saying, “Don’t play this” or “Try playing it this way.”

Had you met Moe Tucker previous to playing with the band?

Pretty sure I had.

Did you continue drumming after the Velvet Underground?

Nope. I did so well at Max’s, what with royalties, spin-offs, and action figures, that I retired, although about every three years I set up the drums, dust ’em off, and help out with a local musical show.

In the early ’80s I was living in Berkeley and playing in a new wave band that was leaning toward punk. One amusing tie-in is the manager of this band, called the Xiles, produced a couple of shows in a local park, which we called Day in the Dirt, as the Oakland Coliseum was at that time putting on shows called a Day on the Green. The featured artist at one of these Dirt Days was none other than Jim Carroll. Nowadays I mostly play guitar or steel guitar, and my son-in-law is the well known Trent Ruane of the Mummies. His six-year-old daughter, Mimi, has her own set of drums too.

What are your overriding thoughts about your Velvet Underground experiences?

Nothing, really, although I have been working for the last thirty-four years on perfecting my own rhythm guitar part for “Some Kind of Love.” I expect that in a couple of years I should have it.

I certainly don’t regret the Max’s experience. It was very interesting and heady for a kid. The one obvious thing in hindsight is I got the job because I worked cheap: beer and a sandwich. This is part of being a wide-eyed teenager: We’re always hungry and totally naive. Had I insisted on a weekly paycheck, they might have hired a more seasoned professional to take the spot. If I had it to do over again, I’d insist on a weekly paycheck. Those steak sandwiches were pretty tasty, though.