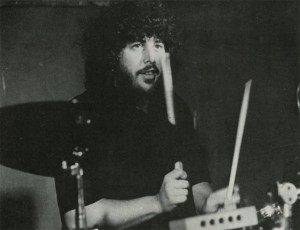 Check the CD collections of Eric Clapton, Keith Richards, Bonnie Raitt, or Paul McCartney, and chances are you’ll find copies of Tiddlywinks, Grooves In Orbit, and Peek-A-Boo by veteran popsters NRBQ. That kind of admiration would be understandable if the Q was itself a household name. But although they’ve shared stage and studio with all of the above, today NRBQ–formed in 1967 by pianist Terry Adams and bassist Joey Spampinato–remains one of the best-kept secrets in pop music.

But whether it’s Tokyo or Toledo, NRBQ still performs like it’s day one–enthusiastic, full of surprises, and capable of converting the uninitiated on the spot. Much of that energy stems from the grooving, rock-steady rhythms of Tom Ardolino, the curly-haired dynamo who took over for drummer Tom Staley back in 1974 without any prior job experience–musical or otherwise–and never left. Yet even after twenty-eight years, the New England-based Ardolino is as upbeat as ever about the band’s prospects.

“We’ve got this upcoming VH1 live gig that features concerts by bands who’ve been around for thirty years or more–and they put us on first,” says Ardolino. He’s just back from a Vermont studio where the band (which also includes guitarist Johnny Spampinato, Joey’s younger brother) is working up new tracks for a forthcoming album. “That oughta help get our name out into the mainstream.”