After taking time off to get sober, re-prioritize his life, and bond with his family, Jason Bonham is back on his drum throne and staying quite busy. “It’s been nice to play again for the right reasons,” says the drummer. “I’d reached a point where I was just going through the motions to get a paycheck, instead of playing because I really wanted to play drums. Now I’m in a situation where if I get paid, it’s a bonus.”

You can hear Jason’s return to form on You Are Here, the latest album by classic arena rockers UFO. Jason got the gig after being introduced to UFO vocalist Phil Mogg by a mutual friend. Although most of the songs were already written when he flew to Germany to record, Jason collaborated on all the arrangements and wrote the song “The Spark That Is Us” with the group while in the studio.

“I hope this is the first of many collaborations between us,” Jason says. A key ingredient to the fresh sound of You Are Here is Bonham’s infusion of bombastic drumming incorporating well-timed finesse, smooth hi-hat work, and the straight-forward punch of heavy bass drum patterns reminiscent of his late father, Led Zeppelin’s John Bonham. After touring Europe with UFO, Jason will fly to the States to rehearse and record with Indianapolis heavy rock band Healing Sixes. Bonham also plays drums on the group’s 2002 album, Enormosound.

Will Calhoun Takes Rhythm to Canvas with New Art Release 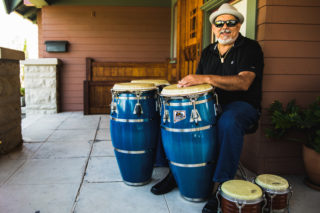 On The Beat with Percussionist Poncho Sanchez