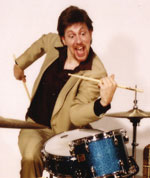 Like a musical cat, Zach Danziger has had more lives than most drummers have sticks. The New York-born drummer cut his teeth with Michel Camilo, Chuck Loeb, and Wayne Krantz, but just when his rhythmic intelligence seemed destined to make him the next chops-heavy drum star, Danziger jettisoned fusion work for his drum ‘n’ bass project, Boomish. Danziger then tackled soundtrack drumming on films such as Ocean’s Eleven and Analyze That.

These days, when not gigging with Boomish or playing in the house band for The Caroline Rhea Show, Danziger uses his considerable programming skills to score films and television. His credits include Daredevil, Blade 2, and Big Fat Liar. How does he do it? “You have to wear clothes so you don’t scare the client,” Danziger says, with the same barmy sense of humor that makes Boomish such a kick in the head.

Danziger still loves to blow, but his soundtrack experience influences every note he plays. “Now that I’m into programming and production,” he says, “when I play drums I’m always thinking in that way. They can loop a bar over and over again, so I might change the groove every two bars, knowing it gives them more to work with. Much of what I play is cut up and edited afterwards. It’s rare that I play on a soundtrack where they keep an entire take as-is.”