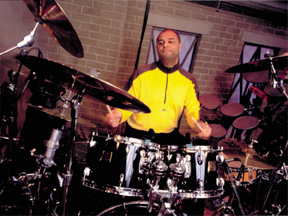 If you live anywhere in Canada or the northern states, you’re going to recognize Wilson Laurencin from the television show Open Mike With Mike Bullard. And you don’t have to wait the whole show to catch a glimpse of Wilson, either. The camera’s constantly on the house band as they provide a foil to the host. In Canada, the Bullard show ratings have soared beyond Letterman, Leno, and other late-night alternatives.

“The show has its benefits,” says Wilson. “We get to play with guest artists like Roger Hodgson of Supertramp, Victor Wooten, and saxophonist Dave Koz. The challenge is that we don’t get a lot of rehearsal time. Fortunately there haven’t been any train wrecks. In fact, the less rehearsal I have, the more I concentrate.”

Laurencin sat in the audience of the Letterman Show once, just to get a feel for the competition. His impressions? “Our show is different as far as the music is concerned,” he explains. “We don’t play covers. Everybody in the band writes ‘bumpers’ [musical segments leading to commercials]. The interaction of the band and host is also different. With us, it’s the whole band and the host, not just the bandleader. Somebody emailed and asked Mike why he didn’t talk to me as much as the other guys. So for a whole evening he made me sit with him as co-host!”

In his down time, Wilson does sessions. Recently he recorded Len’s You Can’t Stop The Bum Rush, which is a huge hit across the States. “It was weird recording that–me alone with a click track. Then they wrote the music to the drums.”

Speaking about weird, take Laurencin’s gig with Canada’s street corner drummer, Graeme Kirkland. The instrumentation includes four drumset players, two violins, bass, dancers, and a golfer. “When the golfer would make a shot, the music would stop, and the dancers would freeze,” laughs Wilson. “It was out, man!”

Down a more well-trodden path, Laurencin is following up his success in the realm of sampling CDs, which he’s produced with Bernard Purdie and Clyde Stubblefield, and is releasing his own in response to the growing market for drum loops. You might also want to watch Wilson’s Web site, www.bigbeatmusic.com, for news of a solo album.