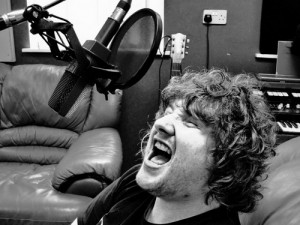 We Are Little Barrie, the debut release by London trio Little Barrie, has drawn enthusiastic critical comparisons to the early Rolling Stones and James Brown for its irresistible groove that swings between ’60s-inspired soulful rock and funky blues. Driving the group’s lo-fi, old-school rock is the raw, energetic drumming of Wayne Fullwood, who was actually a guitarist before joining Little Barrie in 2000.

“When I’ve played guitar in bands, I’ve really been into rhythms,” Wayne explains. “I listened to what the drummers were doing on their snare drums and really locked into it. I guess it was inevitable that I’d end up playing drums, since that’s where the groove is.”

Wayne sings backup on most of the songs on the CD, and even takes over lead vocals on “Please Tell Me” and “Stones Throw.” “When I’m singing behind my kit, I think of Levon Helm and Buddy Miles,” he offers. “Part of making it work is being totally comfortable and really well rehearsed. As soon as I got my kit, I sang while playing. That puts things into context, where you start thinking about song structures, laying off a bit in sections, and getting the feel for the dynamics of everything.”

Little Barrie’s stripped-down ethic is reflected by Wayne’s very minimal setup: kick, snare, hi-hat, and two recently added cymbals. ‘there’s a lot to be said for a minimal approach,” the drummer says. “If you’ve got a feel for it, you don’t need a lot of gear to play a mean, simmering groove.”