What began as a lark for Tris Imboden and musician friend Keith Howland ended up sounding too good to discard. When bassist Lance Morrison entered the picture, they began cutting material in Howland’s home studio for what ended up being called The Howland Imboden Project. (Tris jokes that he originally wanted to call the disc Warts And All.)

Imboden describes the music as “all over the map. There are a couple of semi-Latin pieces and the obligatory power shuffle – all instrumental with a lot of playing – if not by me, definitely by Keith, who is a brilliant guitarist.” The disc also ended up featuring most of the members of Chicago on various tracks. “It’s been very well received,” Tris reports. “And there are some great performances on it, even though I don’t consider mine to be exactly polished.”

Imboden hasn’t had many opportunities to work on outside projects because his work with Chicago is so demanding. Celebrating their thirty-fifth anniversary, the band continues to draw major crowds and great reviews. Even a recent Rhino compilation – The Very Best Of Chicago – entered the charts in the Top-40. After twelve years with the band, Tris says he still feels honored to be a part of such a rich musical legacy. And playing such prestigious gigs as the Memorial Day concert on the west lawn of the Capitol building makes it that much more special.

“The band is sounding better than ever,” Tris says. “We work so much that we’re very tight. But for some reason everyone seems to be really inspired this year. It’s really a joy.” And to cap off the year, after the band completed its seven-month tour, Tris and longtime girlfriend Kelly Muchoney tied the knot. Congratulations! 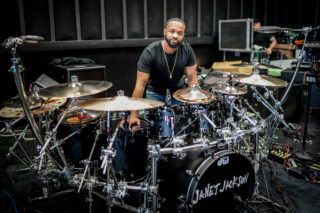 On The Beat with Mike Reid of Janet Jackson: Talks Motivation and Inspiration