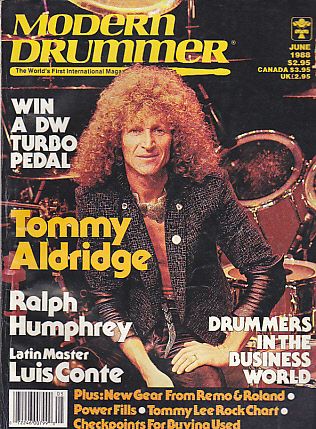 Fifty-year-old drum great Tommy Aldridge first came to prominence with ’70s Southern-rock hooligans Black Oak Arkansas, although you wouldn’t know that by visiting his current Web site (). B.O.A. is only grudgingly referred to as “that band” in Aldridge’s online biography. “I had some real problems with that bunch when I left,” notes Aldridge from his home in Santa Barbara, California. “They tied me up in court for over a year, and caused me all kinds of problems. So I figured I’d give them as little exposure as possible.”

While Aldridge’s musical career was made to suffer early on from an unnamed manager’s “Napoleon complex,” things have certainly been all positive from there. While backing some of the biggest names in guitar-rock from the ’70s to today – including Pat Travers, Ozzy Osbourne, Whitesnake, and latter-day Thin Lizzy. Tommy has carved out a name for himself as a player to watch, partially due to his mastery of the double bass drum setup.

Although he had to undergo surgery for a torn rotator cuff six months ago, right after touring with Thin Lizzy, Aldridge claims that he’s back in fighting shape as far as performing goes. “I’m up to full velocity and torque now,” he reports. “But it was a real exercise in patience for me, because I’d been workin’ solid for about two and a half years without a break, and all of a sudden I went from playin’ five or six nights a week and bicycling three hundred fifty miles a week to doin’ zero. So that part of it was a lot more challenging than the pain.”