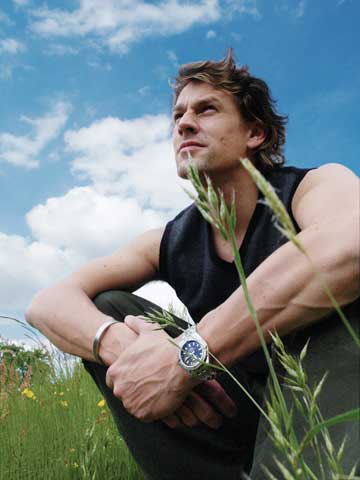 Thomas Lang was standing at the door of his dressing room, waiting to take his spot at the last Modern Drummer Festival Weekend. The thirty-four-year-old, Austrian-born drummer, now a resident of England, was an unknown quantity to this discriminating crowd. By rights, he ought to have been quaking in his shoes. Bigger names than him were nibbling fingernails backstage.

Since I was reporting on the festival, I introduced myself to Thomas, who was chatting with Elizabeth, his wife-to-be following a whirlwind romance. Was he nervous about his upcoming performance, I inquired? “No, not at all,” he responded without hesitation.

I wasn’t buying that, so I countered, “No, I mean, playing in America to an audience of drummers who have seen it all.”

He smiled and repeated, “No, I’m not nervous. Actually, I’m looking forward to this.” Okay, I thought. Hope you’re not a lamb to the slaughter.

Of course, as soon as Thomas set sticks to heads, it became plain why he feared nothing. He was, well, stupendous. He was powerful, thunderous even. His left hand, held in the traditional manner, cut like a knife, while his other limbs danced in an exhibition of rare independence. He had unique ideas, too, such as leading off on a Sonor Twin Effect pedal with a 32nd-note volley on a floor-mounted LP Jam Block, then mirroring that clatter with rolls across the metal rims of his drums.

No question, the thing that people muttered most about was Thomas Lang’s footwork. It drew gasps from the crowd, and not merely due to speed. It was the distinctive patterns, perfectly integrated with his hands, everything so clean and definite. The thing you should note is that he can play all the scary stuff on a single pedal; the double pedal and new Twin Effect pedals are simply enhancements. For my part, the realization came that if Thomas Lang wished–and we will see he emphatically does not – he could be the next “drum gladiator” on the clinic circuit.

By way of warning, the following interview may hold a few surprises for those of you in pursuit of speed. Forget it, Thomas will tell you. Learn control instead, and speed will come. That path, he says, is the high road to freeing your imagination and, ultimately, to creating art.

MD: Did you have formal education on drums?

TL: I did my education in Austria at the Conservatory of Music in Vienna and the Music Academy in Vienna, and I took lots of lessons in Austria. The academy is a university. You have to take an exam to be accepted, and if you manage to get in, it’s free. It’s an old, established classical academy that teaches jazz as well. It’s a world-famous school for classical training.

MD: Nothing you do, at least on the surface, appears to originate from conservative classical training.

TL: Actually, my approach is based in the classical tradition in terms of philosophy, and it’s merged with the jazz tradition in terms of execution. When you train classically, you learn that the reason you learn to play a roll is to simulate sustain, which is something that most people don’t consider–a roll is just a roll. My drumset playing has a lot of dense structures because I come from that background of trying to create sustained notes and pseudo-melodic structures.

MD: You play a really refined left-hand traditional grip. Was that courtesy of your early education, or did you later go back and re-examine hand technique?

TL: My first teacher told me that was the way you hold the stick, and that was that. I didn’t dare think there was another way. It seemed natural and logical when he explained that it was an “asymmetrical grip,” not that I wasted much thought at the time about what that meant. Only later, when I also started playing matched grip–which I consider easier and doesn’t require a lot of training–did I realize that changing grips affected my thinking immensely.
What I find attractive about traditional grip is that I think differently when I hold the stick that way. The asymmetrical grip tends to trigger asymmetrical thinking. In other words, I tend to think less linearly. I think more complexly and polyrhythmicly and play things that overlap more. And the sound of a cymbal will be different because I muffle the stick differently with my hand.

MD: The art of your control is that you are able to suggest that you’re playing a much larger kit.

TL: Yes, it’s just a standard kit with a second snare drum. What my hands and feet are doing is more important than trying to spread that over different sound sources, trying to simulate finesse by orchestrating around the different instruments. Ideally, I would be able to play something musically interesting on just one drum. Nobody in Africa a thousand years ago thought about assembling fifty-five djembes and playing some simple pattern on them.

To me it’s more important to make sense rhythmically than with pitches or tonality. Especially with the drumset, you’re reduced to two main pillars of musical expression: rhythm and dynamics. We don’t have melodic and harmonic means to express ourselves; we can only simulate that by creating pseudo melodic and pseudo harmonic things. I find that a huge array of pseudo melodic instruments like toms is distracting.

MD: When did your interest in hyper foot development begin?

TL: When I was young, this guy whacked a bass drum in church and that left an impression on me. Also the kick drum is the largest drum. It’s the thing you see first. If you draw a drumset, you draw the kick drum first. All through my first drum lessons, I thought the bottom end was so cool. I got more interested in the details of kick drum playing five or six years later. I bought this book on bass drum control by Colin Bailey that was great.

MD: That’s a really traditional book. What did you take from it?

TL: Everything. It was in English, and my teacher would explain it to me. My teacher would say that whatever I did with my right foot, I should do with my left. I didn’t have a second bass drum, so I would do everything on the hi-hat. At a fairly young age, I got a grasp of playing with both feet. As soon as Tama brought out a cheaper double pedal than the DW, I got one and played with both feet.

MD: So did you play on it heel-down or heel-up? Is there some secret method?

TL: My teacher told me that heel-down was the proper technique, and that’s the way I played. Later I incorporated the heel-up for the more powerful strokes. There should never be an either/or. It’s always a combination, and my technique is completely based on that principle. And I always play combinations of muffled and non-muffled strokes. The bass drum deserves to be played dynamically.

MD: Are you capable of, say, playing 16th notes at a fast tempo with one foot?

TL: Yes, of course. You mean speed-wise? I don’t know. I never clocked myself. The goal is to control my feet to the same degree as my hands. Being able to play relating and inter-relating patterns with my feet and hands is also a goal. For example, playing that common pattern–right hand, right foot, right hand, and so on–when I found my feet couldn’t keep up, I would develop foot speed to be able to play those patterns.

If I have the time to sit down and practice, I don’t work on speed. Speed just happened; it came with control. People say, “That’s super fast,” but the speed is only a side effect of having control.

MD: It’s gotten to the point where people are clocking speed with a Drumometer.

TL: That’s the worse piece of equipment! After the NAMM show, Virgil [Donati] and I went down to this “fastest feet” competition in LA. Those competitions are fun, and we went and had a good laugh, but unfortunately some people are mistaking it for music. There’s no place for that in art. Speed chess is a bit like that. There’s a quality to chess that’s lost when you’re going too fast–it’s the creativity. Speed chess is about reproducing standard moves fast. You’ll never have the feeling that the path was worth it.

For more info on Thomas, visit his Web site at www.thomaslangdrummer.com.