Scott Neumann, born and bred in Oklahoma, combines formal and informal techniques of playing the drumset–to great effect. Neumann began performing as a child, graduated from North Texas with a degree in music education, and over a decade ago entered the sometimes harsh reality of the New York City scene.

Scott grew up listening to and playing country, rock, and jazz. He says, “Local musicians and the well-known bands that played the Tulsa area helped me develop a particularly open view of music.” And Neumann’s teachers–Kermit Tandey, Gary Sloan (in Oklahoma), Colin Bailey, Henry Okstel (at North Texas), and later, Peter Erskine–were caring, careful, and encouraged him to be stylistically flexible.

That Scott deals so well with so many kinds of music has brought him diverse employment. “I came to New York specifically because there are so many opportunities to grow here,” he asserts. “I’ve worked with The Woody Herman Thundering Herd several times–even appeared at Carnegie Hall and played Stravinsky’s piece for the band, ‘Ebony Concerto.'” His other credits include Joshua Redman, Brother Jack McDuff, The Jazz Mandolin Project, The Tony Trishka Group, Dave Liebman, and The BMI/New York Jazz Orchestra.

Scott was the primary source of pulsation and rhythmic intelligence in the recent Broadway musical, Swing, which ran for fourteen months. Currently he’s subbing in the revival of 42nd Street, and is involved with other musical shows slated for the Main Stem. 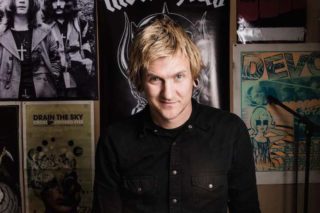