They would either “Make magic together” or become “The biggest train wreck Austin, Texas has ever heard.” That was what multi-percussionist Rick “The Rev” Holeman (pictured) told drummer/percussionist Mike Zeoli when the two teamed up in Del Castillo, an Austin sextet that blends joyous Latin music – including dueling nylon-string guitar-enriched flamenco sections – with spirited rock. As it turns out, spicy sonic “Magic” is precisely what Zeoli and Holeman create in Del Castillo.

The band has cooked up quite a stir across the US, thanks especially to their second album, Vida. In fact, the sextet has scored more awards in Austin than can fit here. Some of those include Best Latin Contemporary Band, Best Band Of The Year, Album Of The Year, and Drummer Of The Year. Del Castillo have also hit the big screen with the song “Dias De Los Angeles,” which is featured in the film Once Upon A Time In Mexico. The flick’s New York premiere bash featured the group jamming with stars Antonio Banderas, Cheech Marin, and director Robert Rodriguez.

Speaking of jamming, it’s certainly a part of Del Castillo. “There isn’t a lot of improvisation in the drums and percussion, but the brothers improvise with their guitar solos,” Holeman says. He cites Santana as a key influence. And like “The Santana guys,” Holeman and Zeoli display “high energy” and a lot of odd phrasing.

Equipped with a Tama Granstar kit, which was acquired in ’89, Zeoli usually lays down foundations and Holeman fills in and accentuates, but that’s not set in stone. “There’s one song on our first album, Brothers Of The Castle, where I’m on congas,” says Holeman, who plays a Latin Percussion setup. “I strive to bring rhythms, textures, and layers with hand instruments or whatever on top of what Mike’s doing. Being open-minded allows us to really create magic with our grooves.”

For more on Del Castillo go to their website here. 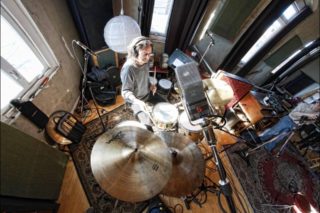 On The Beat with Dean Sabatino of the Dead Milkmen: Talks New Recordings and Gear

Brett “the Ratt??? Romnes of I Am the Avalanche

Phil Collins Reissue Campaign Delayed Due to Emergency Back Surgery