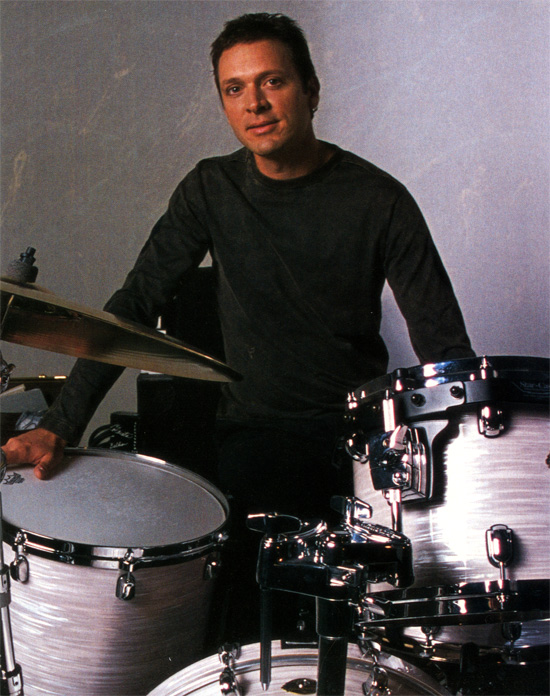 Intelligent, precise, cautious, attentive, responsive – just some of the adjectives that could be used to describe the playing of Goo Goo Dolls’ drummer Mike Malinin. Though he’s the newest member of the Buffalo, New York – based power-pop-rock trio, the Miami native’s playing both on and off the stage with the group could easily fool one into believing he had been an integral part of the act since their inception in the mid-’80s.

Malinin signed on with The Goos just after completion of their breakthrough 1995 release, Boy Named Goo. So Mike did have a few years to refine his chops with his new buddies, guitarist/vocalist John Rzeznik and bassist/vocalist Robby Takac, before laying his sounds to tape on 1998’s platinum-selling Dizzy Up The Girl. And when the call came for Malinin to track radio-friendly hit singles like “Slide” and “Iris,” he had proved that his detailed, calculated rock drive was as potent on record as had already been displayed in years past on stage.

Four years, several more tours, and over three million records later, the friendly and warm Malinin entered the studio once again (for an extremely brief session) to nail down his tracks for the band’s latest smash, Gutterflower. And yet again, Malinin has more than proved his prowess as a hard-grooving, straight-ahead, no-nonsense rock skinsman.

Scoping out his passionate yet tactful approach on Gutterflower tracks like “Think About Me” and “Big Machine,” listeners immediately recognize Malinin as any pop-rock band’s dream drummer. Although there’s nothing overly technical coming from the set of Starclassics Malinin drives, everything simply feels great. And perhaps that’s why Rzeznik and Takac are Malinin’s most satisfied passengers.

MD: Any changes on the kit setup this time around for recording Gutterflower?

Mike: I used a five-piece on the album. It gave me a little more to work with.

MD: Getting a little tired of just four drums?

Mike: It was just time for a change – get that rack tom back. I noticed when I started using this setup in the studio it just felt fresh. It’s like I hadn’t done this before. I used to always play the five-piece, but in ’93 I started playing the four-piece. I like playing small sets. Too many people surround themselves with too much crap that they don’t really need.

MD: For the new album it seems you went out of your way to make it a real production.

Mike: We did spend a little more time on it. We had that luxury, sort of, to be in the studio for a few months. There wasn’t really much of a deadline, because originally we were like, “Let’s get the record out before the end of 2001.” But we realized that was a silly idea because we were rushing ourselves. We spent a lot more time on the mixes, because none of us were really happy with the mixes on Dizzy, for a bunch of different reasons.

Mike: Well, the drums sounded like crap, which bothered me! [laughs] We would record, and it would sound really awesome, but I think the whole record was smoothed over a little bit in the mixing. And I’m not a big fan of [engineer/producer] Jack Joseph Puig’s drum sounds. They’re not really that aggressive. But Gutterflower is a lot more aggressive. Tom Lord-Alge gets awesome drum sounds, and he’s easy to work with.

MD: What are some of the things he did to your drum sound that you like?

Mike: He kept them more natural.

Mike: I think so. I’ve never understood why, with today’s technology, it’s so hard to get good drum sounds. Go back and listen to [The Who’s] Who’s Next? The drums sound better than any other recording ever made, and that was thirty years ago.

I think a lot of it is that guys try to do too much. You spend so much time getting a vintage drumset sounding just right and use classic mic’s – and then the mixer takes it and compresses the hell out of the drum tracks and adds samples! But I was really happy this time with my drum sound. I think it sounds the way my drums do naturally.

MD: What do you look for in a snare sound?

Mike: I don’t like a snare to sound fuzzy. I want to hear the attack. If it’s not clear, what’s the point? [Producer] Rob Cavallo’s really heavy on that too. He’ll stop a track and say, “I think you need to hit your drum harder.”

MD: So you really slam in the studio?

MD: Did you use a variety of snare drums for the record?

Mike: Yeah, I actually used five different snares. Some of them I remember specifically from older recordings. Like on “Iris,” I used a 5″ Ludwig Black Beauty. You’ve gotta have a Black Beauty on every recording. It’s the most classic drum in the world.

I just got a Tama sort-of Black Beauty copy, and it’s awesome. It’s a great drum, so I’ll be pulling that one out a bit more. But my stock snare is a Starclassic 6 maple drum. It’s a good snare and it’s on most of the record. It’s got a good ring.

MD: I’ve noticed you’re not afraid to let a little over-ring cut through with your snare sound. In some instances it’s almost become your trademark.

Mike: There’s barely any muffling on my snare drums – just a little bit of tape on the top head. Live, I try to get away with nothing, but it doesn’t always work.