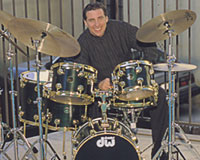 Ironically, jazzman Mike Clark will go down in history as the guy who cut one of the slickest funk tracks in history, “Actual Proof.” Recorded in the ’70s with Herbie Hancock’s Headhunters, it featured a nimble Clark splitting up running 16th notes around the kit, his snare drum and hats dancing. Blame it on jazz, says Clark: “I stack that stuff up on the funk!”

That funk reputation hung with Mike Clark like a brown stain on a white shirt. His new album, Actual Proof, contains more evidence of his funk and jazz abilities. Recorded with an all-star team including guitar wizard Charlie Hunter and his Headhunters comrade Bennie Maupin, the CD isn’t gathering any dust. Clark has been touring it relentlessly, billed as The Mike Clark Prescription Renewal Band.

Expect a new Headhunters album in the next year, and look for Clark on the road. He’s barely had time to drop in at Drummers Collective for coffee, forget about teaching. “It’s because I’m gigging, man,” he exclaims. “I’m gigging and I’m digging it!”