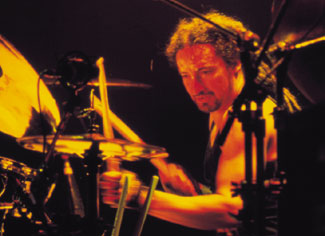 “It’s beyond belief when we found out we were playing for the Queen of England,” Mike Bordin gushes about his latest gig with the hugely popular Ozzy Osbourne. Even though our conversation takes place over the phone, one can just picture Bordin’s eyes lighting up, gazing in disbelief, lost in amazement.

And “amazing” just about describes Bordin’s healthy career as a highly sought-after rock drummer. Through two decades of touring and recording experience in various name-brand rock acts, including Faith No More, Korn, Jerry Cantrell (of Alice In Chains fame), and most recently Ozzy Osbourne, the lively and talkative dreadlocked super-slammer still appears bewildered by the accelerating caliber of gigs and challenges thrown his way. And perhaps it’s that constant sense of enthusiasm that keeps Bordin fresh and wide-eyed yet humble and honest, as both a fiery, eager performer and as a respecting, sensitive personality.

Although Bordin started playing drums with the late Metallica bassist Cliff Burton, he got his first serious career launch in 1982 with the Bay Area–based Faith No More, an eclectic rock act whose hits like “Epic” and “Falling To Pieces” proved that any selection of genres–from metal to rap to opera–could be melded into a three-minute hit single. It was in Faith No More where Bordin was able to make his mistakes, fall and fumble, develop his style, and eventually polish and nurture himself into a finely tuned rhythm machine that has allowed him to mutate his pastime into a full-bore livelihood.

“As soon as we got our chance to tour–and starve on tour–we were there,” Bordin says of his first opportunity to label himself a professional musician with Faith No More. “It was better than starving at home!”

That same burning sensation in the belly of Bordin soon shifted from starvation to an internal flame of motivation, a drive and persistence that led the drummer to gain acceptance because of his inventive, distinctive performances in Faith No More. He was soon touring worldwide, sharing the bill with top names, and gaining the respect of his peers and even his idols, such as Ozzy Osbourne.

Bordin’s easily recognizable style includes a set of unique performance characteristics–riding with the left hand yet kicking with the right foot, placing the rack toms up high and flat, positioning his throne rather loftily. But more importantly, Bordin is easily recognized by his sound: his steady, deliberate rock drive, dense knowledge of various styles and rhythms, and prevailing tenacity to shoehorn himself into just about any musical situation presented to him. “It’s always good to know French cooking,” Bordin half-jokes. “You’ve still gotta know how to make grits and gravy.”

With that sliver of advice, Bordin’s percussive culinary skills were put to the ultimate taste test when he was offered the chance-of-a-lifetime gig–joining Ozzy Osbourne’s ensemble (with guitarist Zakk Wylde and bassist Robert Trujillo) both in Black Sabbath and on Ozzy’s solo gig, on stage and in the studio. So, maintaining Bordin’s preference for catchy, poignant euphemisms, let’s just say that he’s baked one hell of a turkey with his latest endeavors.

MD: Is it still surreal to be working with Ozzy?

Mike: To me it’s never been surreal, because I always look him in the eyes. And we got to know each other pretty well as people before we played together. He jammed with Faith No More, and that’s how we met. He liked “The Real Thing” and “Epic.” He’d come down and jam with us on “War Pigs.” And after the shows we did, he and I would talk. I’m just a huge Sabbath fan, probably the hugest fan on the planet. That band was so important. I told Ozzy that when I first met him, and we connected right away.

MD: So have you found it easy working with Ozzy?

MD: What are certain aspects of the gig that differentiate it from the others you’ve played?

MD: Did you find it difficult to adapt to a new environment, working with a new set of rules that you had to play by?

Mike: Well, you’ve gotta learn ’em. That’s the thing–you’ve got to figure out what you’re doing and what you need to do. You have to be appropriate for the situation. That’s been a huge part of my learning process, since now I’m not in a band that I started. I’ve not been one of the five hands on the control stick. I’m trying to bring the best out of what these other people are trying to do. It’s been a huge education.

I have to say that I feel a lot of my learning started when I stopped playing in Faith No More. Since that was “my” band, and I started it, it was safer. I had more control and I could do whatever the hell I wanted. With Ozzy, my job, and I’m hugely proud of it, is to play his music so he can sing his best. From there, I put my stamp on it and do my thing. Buy I have to remember that I’m a support player. I need to get into the music and support it properly.

MD: Was there anything in the Ozzy gig that you weren’t prepared for?

Mike: The thing that I thought was really interesting going in was learning the classic tunes, and then finding out that Ozzy’s approach to them had changed. I remember him saying, “Well, we don’t do it like that anymore. We do it like this.” I realized that over the years of working with different drummers, those tunes–and Ozzy–had evolved. That was very interesting to me.

I came into this situation from the very start with a huge amount of respect for the music, the person who made it, and the people who like it, because this music is important to a lot of people. I felt good about it and I think I’ve been careful with trying to play the music the way it’s supposed to be played. You could compare the music to a classic car. Classic cars have their own pluses and minuses. They don’t have good safety belts and maybe some of the parts are more fragile. But by and large they’re way more beautiful and have much more character than anything these days. You take it for what it is, and you’ve gotta respect it.

MD: Why do you think you were selected for Ozzy?

Mike: As I said, I was the hugest Sabbath fan, and Ozzy knew it. We talked about my doing the gig several times, and I think it got to a point where he really wanted to give me a shot, and it just happened. I was stoked.

MD: How well-versed were you with the material?

Mike: I knew the Sabbath material backwards and forwards, one hundred percent, in my sleep.

MD: What about the Ozzy material?

Mike: My wife and I went to Hawaii–I have a big thing about volcanoes. We went to the big island and to the volcanoes, and we hiked around, which was great. While doing that I listened to all of Ozzy’s stuff non-stop. When I came back, I started rehearsals with the band, and it felt good.