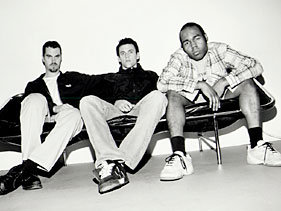 Recording Pretend I’m Human proved to be a radical departure for Orange 9MM drummer Matthew Cross, an old hand at laying out well-rehearsed rhythm tracks while sitting behind the glass. “We demoed like seventy songs in the past year and a half,” he says. “But we ended up ditching all those songs when we went into the studio. We just decided to start from scratch and begin the record right then.”

Fleshing out new beats for his band while in the studio certainly didn’t help his label cut recording costs. But Cross said its benefits were quickly seen in his playing. “It allowed me to grow as a player,” he says, describing his quick-found abilities to collaborate with bandmembers Chaka Malik (vocals) and Taylor McLam (guitar, bass). “Sometimes when I’m sitting there busting my ass trying to get a beat down, I’m concentrating more on playing it than actually listening to it.”

The session proved to be as physically demanding for Cross as it was stylistically challenging. But the physical demands also provided an opportunity for Cross to take his skills to another level. “It was a difficult record for me in the sense that I was playing for twelve hours a day,” the drummer says, “getting tennis elbow and the whole thing. I really worked my ass off.”

The band might not have totally dropped its metal/hip-hop fusion style for Pretend. But it did delve deeper into its own music collection in search of similarities in the rhythms of bands as dissimilar as Rush, Jay-Z, and Kraftwerk. The resulting rhythms are a tribute to the similarities of beats throughout all genres. “There are some songs on there that I played thinking they sounded like a cross between Bauhaus and The Talking Heads,” he says. “Those grooves ended up being a perfect foundation for Chaka to do hip-hop stuff on top of.”

Cross chalks up his cultural- and genre-crossing rhythms to the universality of music. “It’s a testament to how human beings, regardless of the environment that they grew up in and their religious, cultural, and ethnic differences, all have things in common.”