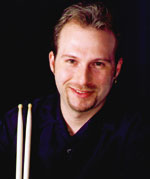 Miami’s Lee Levin has played drums on the last several Ricky Martin recordings, as well as on some recent live dates. He’s also on the Latin star’s upcoming English-language record. Ricky needs energy from a drummer, Levin says. He needs someone who drives the band.

Levin is currently expanding his home studio. I used to do about twenty-five or thirty percent of my work from my home studio, he says. But now it’s about seventy-five percent. It all boils down to the sound they want. If they want a big room sound, the producer will pay for a studio to do it. But my setup is great. An artist or producer will often courier over a disc, I’ll load it in, we’ll talk on the phone, and then I’ll record my parts and send it back. In fact, that’s how I ended up doing both Kelly Clarkson’s and Clay Aiken’s records.