A musical education can be had from a variety of sources. You could rent how-to instructional videos for just about every style and genre you’re trying to master. You could sit for hours with headphones and over-analyze every fill and lick from your favorite drummer’s performances. You could pony up the bucks and sign up for private lessons. Or you could attempt to do what Kris Kohls from Adema has done–hit the road for thirteen months straight with some of hard rock’s finest.

Let’s preface all this by mentioning the fact that the thirty-year-old Kohls has been playing drums for over twenty years (but has never received any formal percussion instruction). Yet, even two decades of sweating it out in the garage, on stage, and in the studio couldn’t compare to the crash course he’s received in the past year, since his band’s self-titled Arista debut hit the streets. According to Kohls, it’s been one mighty lesson in building stamina, being efficient with his energy, and simply putting some serious brains behind Adema’s show.

“I think my drumming has changed drastically.” Kohls reports. “As far as technique, I’m pretty much a basher. Instead of paradiddle-diddles and stuff like that, I just hit ’em as hard as I can. But over the last year, I’ve definitely developed a lot more technique as far as being controlled, pacing myself, and not gripping the sticks so tight–little things you learn from playing so much.” 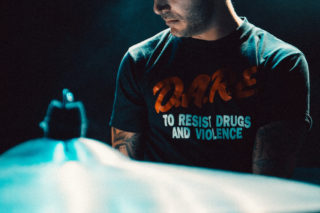 On The Beat with Lou Vecchio of New Politics: Talks Upcoming Tour and Gear