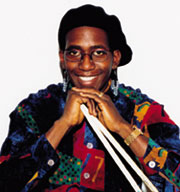 Fidel Castro may have squandered what many consider the best of Cuba. But he also developed exceptional arts institutions, which, even today, continue to nurture amazing talents. Among them, is Latin drumset king Horacio “El Negro” Hernandez.

Hernandez honed some of his formidable chops with keyboardist Gonzalo Rubalcaba. When “El Negro” departed, another stalwart time-dancer, Julio Barreto, stepped up. With the release of Iyab’, his premiere album as bandleader, Barreto is destined to climb his own pinnacle of success.

Like Hernandez, Barreto eventually defected, and today lives in Switzerland. The drummer formed his own ensemble in ’97, comprised of Cuban expatriates in Europe. He describes Iyab’ as “The fusion between Afro-Cuban and jazz-rock.” The album dances joyously on the virtuoso edge. “Songs like “Cantar Bueo” are traditional rumba with modern elements,” Julio explains. “In “donna Lee,” I tried to retain its essential bebop character, but with an Afro-Cuban atmosphere.” Barreto took only six months to compose, rehearse, and record Iyab’. Which makes it – and him – all that more extraordinary. (Iyab’ is available through Connector Music, www.efa-medien.de.)