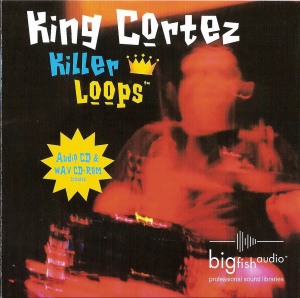 Jody Cortez has recently released a CD of loops under the banner King Cortez called Killer Loops (Big Fish Audio). “It encompasses performances in Latin, bebop, jazz, reggae, rock, funk, R&B, hip-hop, and straight-ahead rock,” Cortez says. (It’s available online at www.bigfishaudio.com or at any large music equipment store.) “The great thing about the disc is that the performances are all live,” he says, “so you can put together a killer live-feeling track that is unlike any machine sampled track.”
Cortez, who has worked with artists such as David Crosby, Michael McDonald, and Christopher Cross, says he feels that rather than taking work away from drummers, his CD shows the need for natural, real-feeling drums. “The more you like my CD,” he says, “the more you’re going to like the feel of a real drummer. I also like to work with loops and play over them, pulling the loops in and out against real drums. My disc can be used as a learning tool for drummers.”
Other recent projects for Cortez include work with solo artist Mark Hays, as well as heading his own music production company. You can also hear him on the most recent album by June Kuramoto called Spirit And Soul, as well as on a new Sonia Dada project, due out shortly.