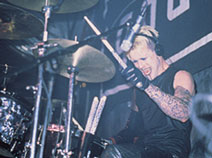 “‘Break You Down’ is one of those songs where I wanted a driving drum beat that would overwhelm the listener, like a train you couldn’t stop,” says James O’Connor of Godhead, describing one of the songs on the band’s new album, 2000 Years Of Human Error.

Though Godhead is the first band signed to Marilyn Manson’s new label, Posthuman Records, O’Connor says that Godhead’s music differs somewhat from Manson’s. “Our message is more about knowledge, and it’s not so pissed off and maybe a bit more enlightened. Our album is very diverse. Some songs are in your face, with crunching guitars and heavy drums. Others are slower and more dramatic.”

O’Connor notes that his favorite band is Pink Floyd and that lead singer Jason Miller’s preferred listening is The Cure. “Sure, we want power, drama, and emotion in songs,” O’Connor says. “But we also want the epic. After hearing our songs we want you to have the feeling of, ‘Wow, that’s unbelievable.'”