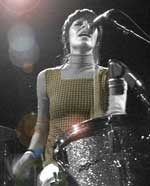 When LA-based atmospheric rock trio Midnight Movies needed a drummer, vocalist Gena Olivier sat down behind a kit stored in the band’s practice space and discovered an untapped talent. “When I sat behind those drums, it reminded me of when I was thirteen and my boyfriend taught me a drumbeat,” she remembers. “I’d always watched drummers and thought, ‘I could never drum. That seems way too hard.’ But as soon as I started playing it just felt right, right away.”

Olivier’s bandmates, guitarist Larry Schemel (brother of drummer Patty Schemel) and keyboard player/guitarist Jason Hammons agreed: Olivier should drum until they find a permanent drummer. “As I started playing more and more,” Gena says, “I got better quickly and realized that my new role as the singer and drummer was going to work out.”

During Midnight Movies gigs Gena especially enjoys playing songs that give her the chance to take a break from singing and just concentrate on her drums. “Once the vocal part ends on a song like ‘Strange Design’ [from the band’s 2004 self-titled debut], I can move the microphone behind me, because I’m drumming for the rest of the song.

‘singing and drumming at the same time hasn’t really hindered my playing,” she continues. “But let’s face it, if something has to be sacrificed at any point, it’s going to be the vocals. The beat has to be there.”