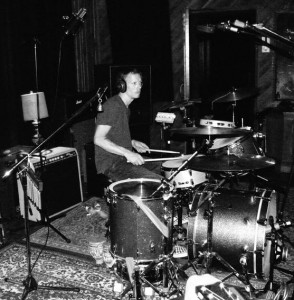 Those of you who closely read album credits may have noticed that it wasn’t Dave Abbruzzese playing drums on Pearl Jam’s breakthrough album, Ten. Listed in the album is actually another Dave’dave Krusen. Granted, to date the album was Krusen’s fifteen minutes of fame, but he’s quick to assert that it’s not his last chance. He’s even had other brushes with notoriety here and there – namely with Hoovercraft (who opened for The Who) and Candlebox (one of the many Seattle bands that broke in the early ’90s). So it’s fitting that his latest rumblings in the band Unified Theory should be taken seriously.

Krusen explains how he walked into his current gig: “After finishing the Candlebox record, I was back in Seattle when Brad Smith [bassist of Unified Theory, formerly of Blind Melon] called. He said, “We’re recording. Could you come over and lay down some drums for a couple of ideas we have?” I said, “Yeah, sure,” and went over. The recording went so well that two songs we cut actually ended up on the new record.”