(September 2005 Issue)Many drummers have hit it big since the post-metal resurgence of the early ’90s. But no one has had the impact and influence of Dave Grohl. With the full-body flam and bass drum contortions of Nirvana’s “Smells Like Teen Spirit,” Grohl forever changed drumming, turning Muppet-like heavy metal caricatures into what Grohl himself calls “a drummer’s sport.” There had been pummeling protagonists of the drums before, but none exacted his level of pop craftsmanship, instinctive technique, and innovative song interpretation. 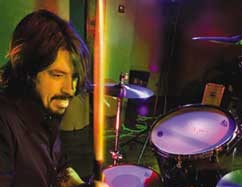 Today, with the all-Grohl supergroup Probot, Dave returns to the drums with a vengeance. The molar-flashing Virginia native has once again confirmed his status as one of the most intuitive, musical, and creative drummers of this generation. He’s also proving to be a quick-witted musician unafraid to follow his heart’s ambition.

Popularizing the now ubiquitous quiet/loud formula with Nirvana, Grohl supported the moody and often manic songs of Kurt Cobain with a style that crossed the classicism of a Ringo Starr with the head-goring aggression of Grohl’s hardcore heroes, Kent Stax, Bill Stevenson, Dave Lombardo, and Earl Hudson. Add a love of Tony Thompson, D.C.’s go-go funk scene, and one of the goofiest grins in rock, and you have Dave Grohl’s recipe for success.

But drumming was never enough for Grohl. With Nirvana’s premature end, he founded pop-rockers Foo Fighters, eventually handing drum duties over to the very capable Taylor Hawkins. The band has sold millions of records and even grabbed a Grammy.

Foo Fighters’ third album, There Is Nothing Left To Lose, left Grohl searching for meaning beyond pop hooks and ear-shredding volume with sweet songs like “Learn To Fly.” With a new lease on his rock ‘n’ roll soul, Grohl and The Foos recorded One By One, but he yearned for a return to his hardcore drumming roots. Searching for sustenance, Grohl did sessions with Reeves Gabrels, Killing Joke, Tony Iommi, and Tenacious D. With hardcore roots still calling, Grohl put all his energy and considerable drumming muscle into Probot.

Grohl’s two-fisted tribute to the ’80s hardcore canon, Probot was conceived, performed, and produced entirely in his Virginia basement studio. What began as casual tracks laid down to Pro Tools over a couple of beers soon became a full-blown metal mission. Recruiting his vocal heroes from such currently lost-in-the-wilderness bands as Motorhead, Mercyful Fate, Venom, Sepultura, and Voivod, Grohl created a skull-crushing blowout that is irony free and seriously song-structured. As always, his unerring musicality turned what could have been a collection of novelty one-offs into a gripping gala of pounding stoner rock.

At a recent Headbanger’s Ball performance, Grohl and the assembled Probot “band” stomped through “My Tortured Soul,” one of a handful of tracks where the drummer’s implied double bass drum trickery and all-or-nothing energy electrified the SRO audience. Probot reveals Dave Grohl in all his drumming glory, from the introductory double bass stampede of “Red War” to the closing Gothic fog and ice bell ambience of “Sweet Dreams.”

Other hardcore highlights include the toxic tom executions heard in “Shake Your Blood,” the speedball rhythms of “Access Babylon,” the flying dinosaur dynamics of “The Emerald Law,” and the agitated, neck-snapping suspense of “Dictatosaurus.” Throughout the album, Grohl lays down the kind of signature parts that will make air drummers the world over shout, “Beat it with your fist, Dave!”

Similar, but more metal-pop funky, Grohl also drummed on Queens Of The Stone Age’s breakout 2002 album, Songs For The Deaf. Using unorthodox recording techniques and his full arsenal of tom-truncheoned grooves, full-set triplet rollovers, and roaring flam punctuations, Grohl again created a template for rock drumming that will be scoured, studied, and followed for years to come. Obviously, Dave Grohl is back at the drums in a big way.

MD: When you returned to the drums for Probot, was there a moment when you realized your dream was becoming a reality?
Dave: The whole thing started in January of 2000, after The Foo Fighters made There Is Nothing Left To Lose. That was our first record where we really started focusing on low-level dynamics, acoustic sounds, and songs that moved from verse to chorus without surrendering to that quiet-loud dynamic. In ’99, rock music was becoming a victim of dynamics. I had a lot of ideas and I wanted to see where the melody took the songs rather than where the distortion pedal could take them.

We started writing as a group in my studio in Virginia, and the songs stemmed from jams. But it was petty mellow. Then on tour I would pop in a Sepultura record or Slayer’s Reign In Blood before hitting the stage. I would listen to that music to get pumped up to play “Learn To Fly.” So I started questioning the direction I was taking with my music. I love that era of Foo Fighters music, but having grown up listening to hardcore punk rock, underground metal, and really fast, sinister music, it seemed strange that it was absent from anything else I was doing.

MD: Had you lived out your singer/songwriter role?
Dave: It was all about challenging myself. I hated the sound of my voice and I questioned everything: my guitar playing, my songwriting, and especially my drumming. To strip it all bare was a real test.

MD: So what does Probot represent?
Dave: Probot is just me going back to my roots because I needed to prove to myself that I still had that music in me.

MD: When did you first start listening to hardcore and metal?
Dave: I started listening to underground American hardcore in 1982. I had a relative that turned me on to punk rock, and by ’84 I was completely immersed in it. That scene was totally independent and underground. I had my own fanzine, and I started a band. It really instilled that “DIY” [do it yourself] ethic. I started discovering bands like Venom, Motorhead, Slayer, and Mercyful Fate, bands that were similar to hardcore in that the aggression, rebellion, and energy of the music was still there, but they were even nastier.

MD: Did you study the drummers in those bands?
Dave: Oh yeah. That’s how I learned to play drums. I learned from listening to my favorite albums. I would put on Rush’s 2112 and try to play with Neil Peart. But then, as I listened to hardcore and metal, I realized it was a drummer’s sport. I was really into Earl Hudson [Bad Brains], John Wright [No Means No], Jeff Nelson [Minor Threat], and Dave Lombardo [Slayer]. I would learn all of their licks verbatim. And I didn’t even have a drumset!
This may sound dumb, but I had a chair that was next to my bed, and I would kneel down on the floor and put a pillow between my legs to use as my snare. I would use the chair to my left as the hi-hat and use the bed as toms and cymbals. And I would play to these records until there was condensation dripping from the windows.

MD: Do you practice the drums now?
Dave: Sometimes, and there’s so much more I would love to learn. I’m not even halfway there. I feel like I could be such a better drummer, but I’m not a drummer in a band at the moment. [laughs]

MD: But you always return to the drums.
Dave: Always.