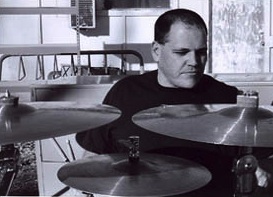 When we caught up with Darrin Pfeiffer to talk about Goldfinger’s new record, Stomping Ground, he was on tour in Barcelona, Spain with the band. “The fun thing about making this record was that we got to work with producer Tim Palmer,” Pfeiffer says. “Tim did a lot of stuff with Bowie, Tin Machine, and Pearl Jam, and he really knew how to get us to gel as a band. The reason I particularly like him is because whenever there was an argument with the other guys about a drum part – ‘Darrin, we don’t really think it goes with the song’ – Tim would go, ‘I think it goes great!'”

Pfeiffer says that Stomping Ground shows the band’s heavier side. “This record is definitely a rock record,” he insists. “In a way it goes back to our first record, which was about power. Our last record [Hang Ups] focused more on ska and reggae. It’s not that we didn’t write any of those kinds of songs for this record, because we wrote about twenty-eight tunes to pick from. But at the end of the day, when we all sat down to decide what material we’d use for the record, the ska songs just didn’t make the cut.”

Prior to this record, the band released an EP called Darrin’s Coconut Ass, Live From Omaha. “The band always makes fun of my hairy behind – and we’ve wanted to call a record that for years,” Pfeiffer says. “We did a broad spectrum of cover tunes ranging from The Police, Joe Jackson, and The Smiths to Peter Tosh. We had no new songs at the time, so we decided to record covers.”

Pfeiffer also did his own solo record, The Revenge Of Chicken McNuggets, during breaks in Goldfinger’s schedule the last couple of years. About the record (available through the band’s Web site, www.goldfingermusic.com), Darrin says, “I wrote a lot of songs and presented them to the band, but they said, ‘No, we can’t use ’em.’ After a while these songs started piling up, so I decided I’d record something myself.

“They’re just thirty of the stupidest songs you’ll ever hear,” Darrin says with a laugh. “But what I like about the record is it’s all me. I wrote it, produced it, recorded the drums, bass, and guitar, and sang. I mixed it, too. I can’t wait to do another one.”