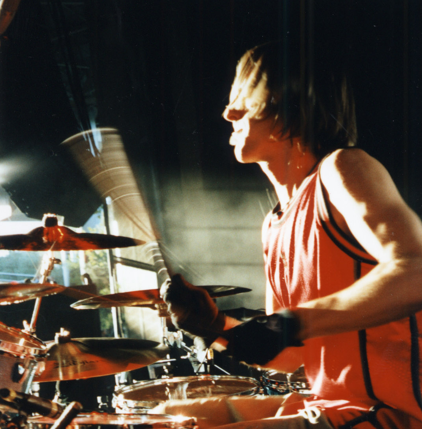 “I learned to play drums by putting on headphones and playing to Rush’s Fly By Night until I knew every song by heart. Neil Peart was my first major influence.” So says Chris Hesse, drummer for Southern California hard rockers Hoobastank.

Describing his own style as that of a “straight-ahead rock drummer,” Hesse elaborates that his contemporary influences include Dave Grohl and Foo Fighters’ other drummer, Taylor Hawkins. Of Hawkins, Chris enthuses, “He has incredible chops, but he also lays down the fattest rock I’ve ever heard. He totally rocks out!” Hesse knows something about rocking out: It’s his urgent, pounding cadence on songs like “Pieces” and the MTV hit “Crawling In The Dark” (from the band’s self-titled debut) that totally drives Hoobastank’s heavy rock grooves.

Though drums are his primary passion, Hesse also plays piano and guitar and considers himself to be a musician first and a drummer second, especially when it comes to doing what’s best for the song. “You can always tell a drummer who plays another musical instrument from one who only plays the drums,” he offers. “I think a lot of drummers separate themselves from the band and are just on their own as far as how the music goes. They don’t accent the music or realize that the drums can be a musical instrument.”