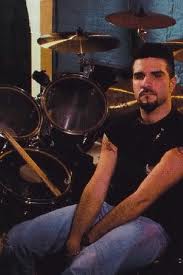 “I think I understand guitar more than most guitar players do,” says Anthrax drummer Charlie Benante. “I come at it from two different ways’the guitar rhythm perspective and the drum perspective.” You see, the New York-based thrash metal drummer isn’t just about getting behind his Tamas and churning out blast beats to whatever material is present. Benante’s service in Anthrax plays a much larger role than what’s typically expected of a metal drummer.

Benante’s other tasks include being the primary songwriter in Anthrax. In fact, he wrote all of the material on their latest release, We’ve Come For You All. Even more interestingly, Benante is practically the band’s second guitarist – at least on record. “I’ve played guitar on every release since Sound Of White Noise,” he states. “Scott [Ian] plays a certain way, where he throws down all the rhythms and foundations of the songs. Then I go in and add my thing, like textured or doubled guitar parts.”

In another unusual move, Benante tracked some of the material on We’ve Come For You All wholly on his own, with nothing but a click track to keep his meter in check. “I knew the songs so well in my head,” Benante says, “I figured, ‘Let me just go for it.'”

Working with the production team of Scrap60, Benante set up two drumkits in the tracking room. One was his main live kit, an eight-piece double-kick setup. The other, a five-piece, allowed for greater versatility and enhanced comfort. “Sometimes when you simplify your setup,” Benante explains, “it makes things a lot easier. I really like the way different setups affect my approach to playing the drums.”