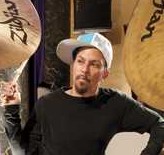 What do members of Faith No More, Limp Bizkit, Metallica, and Rage Against The Machine, as well as Bootsy Collins, Tom Waits, South Park co-creator Matt Stone, and legendary Police drummer Stewart Copeland all have in common? They each had a hand in the making of the recent Primus release, Antipop.

“John Bonham and Stewart Copeland were probably my two biggest influences as I was learning to play drums,” says Primus drummer Brain. “To have Stewart agree to produce on our record was an honor for me. We walked into the studio and there were the drums that he had played with The Police, with heads that looked like they’d been on there for ten or fifteen years. He wanted to jam with me first, so we had two drumsets set up. We just went off.”

Copeland’s influence can be heard particularly in Brain’s playing on the Copeland-produced track “Dirty Drowning Man.” “When you have Copeland looking over your shoulder while you’re recording, you can’t help but draw on his influence,” says Brain. “He actually suggested certain fills and patterns to use in the song and sat down and played examples. We talked shop and really had a great time.”

As involved as Brain is in the modern dance-groove scene, creating sample loops and break beats for deejays on his own label, his drumming on Antipop is very old-school rock ‘n’ roll, with raw, live-sounding drum tracks. “I wanted the drums to sound as natural as possible,” he explains. “I wanted to capture the sound that you would hear on a Jimi Hendrix or Led Zeppelin record.”