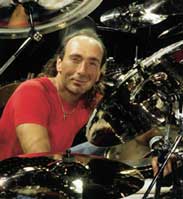 Billy Mason has one of the most coveted country gigs out there with Tim McGraw, but he never takes his success for granted. Even though he’s currently on the Soul To Soul tour with McGraw and McGraw’s wife, Faith Hill, Mason never forgets that there are people who are less fortunate, and who he wants to help if he can.

Last year, when Mason was performing in Atlantic City with McGraw, he met a ten-year-old boy named David who has multiple sclerosis. David was in a wheelchair, and the drummer felt compelled to talk to him after the show. “I asked him what he wanted to be when he grew up,” Billy says. “And he said, ‘I want to be a drummer just like Billy Thunder Mason.’ I said, ‘If you had a set of drums like mine, what color would you want?’ He told me red.”

Mason knew exactly what he had to do: He bought a set of drums through DW for David as a Christmas present. Zildjian sent cymbals, Pro-Mark sent sticks, a bag, and T-shirts, and everything was sent to David’s house. “Now he sits in his wheelchair and plays them,” Billy says. “I wish more drummers – and artists – would do things like that.”