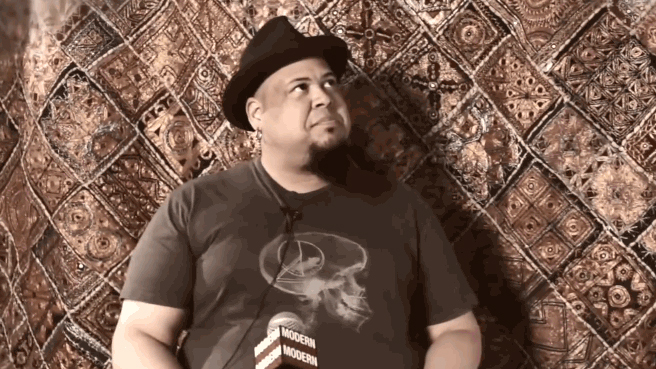 When you meet with Abe Laboriel Jr., you can’t help but smile the entire time. It’s not just hearing about his success stories, it’s that his presence exudes a glow and inner kindness that is both spiritual and contagious.

Laboriel is a self-admitted workaholic. But when you ask him what the down sides to that disease are, he says with a laugh and a sparkle in his eyes, “I haven’t found any yet.” Abe does concede, though, that he could use a vacation, having not taken one in about five years. But a career in music is what he’s chosen, and it seems that it all just gets better and better.

Abe’s enthusiasm and excitement is never-ending. And why should it? He’s found himself in some cool situations. With a huge smile on his face, Laboriel recalls the night the band spent at McCartney’s guest barn, awakening to the smell of bacon and eggs (probably veggie), then stumbling into the main kitchen to see Paul and his wife Heather cooking breakfast for the band.

Currently in the midst of a tour with the former Beatle, Abe can barely contain his excitement about the nearly three-hour set. What tunes does he get to play? Twenty-two Beatle songs, ten Wings classics, five McCartney solo selections, and a thirty-minute acoustic portion during which Abe gets to sing “Eleanor Rigby” background vocals alongside his hero.

“We huddle behind the curtain right before we’re going to play and pray before the show,” Laboriel reveals, “which is something Paul said he’s never done before. He leads us in prayer and says something like, ‘God, we want you to take over. Let us have a good time and let everybody out there have a good time. Thank you for letting us be here to do this.’ Wow! What beautiful humility, handing it over that way. My dad has always said that music is all around us and it visits us. To be with someone who lives that same philosophy is beautiful.”

Laboriel grew up with that philosophy in his household, as well as having music in abundance. His father, session master bassist Abraham Laboriel Sr., has worked with a mind-blowing list of artists and accompanied most of the great drummers of the past several decades. In turn, he infused his son with a respect and love for music–not to mention opportunities that could not be bought.

Abe Jr. began messing around on the drums at age four, and by ten he was taking lessons from drumming great Alex Acu a. Naturally, Abe was also able to watch his father’s sessions in action. During his junior year in high school, he attended the now defunct Dick Grove School of Music, where he studied with Peter Donald. In 1989, his last year of high school, Abe had progressed to such a degree that he was honored by the National Foundation For The Advancement Of The Arts and Down Beat magazine. Shortly thereafter, again, following in his father’s footsteps, Laboriel enrolled at the Berklee College of Music.

MD: What do you consider your first break?

Abe: The Steve Vai gig. It wasn’t the greatest experience, but it was the break. It was one of the first things I really did on my own, strictly on my own merit, and I can pretty much trace everything I’ve done back to that gig. Steve Vai led to Seal, which led to every producer in town seeing me play. From there I started doing lots of recording, eventually winding up with k.d. lang, doing her tours for a while. I got the gig with Sting because he saw me play with her. And the producer who hired me for Paul’s record was the head of A&R at k.d.’s label. We hadn’t worked together, but we met, so he said, “I really thought you were a nice guy. Do you feel like making a record with Paul McCartney?

MD: Personality is a major piece of a successful career.

Abe: Absolutely. Attitude is ninety percent of it.

MD: Where do you think your inner glow comes from?

Abe: Definitely from my family and being loved.

MD: For all those parents of musicians out there, what was the best thing your parents ever did for you?

Abe: They gave me really great guidance, but allowed me to still be a goof-off and an individual. They helped me have confidence in being myself, not worrying what everybody else might think. All that matters is what you feel about yourself. Watching my father and the joy he has was always encouraging. To see somebody who was fully in love with what he does and fully in love with every moment was a great example and something to strive for. What I love about music, and specifically playing live, is you get to see that instant reaction of somebody getting to let go of their day and feel uplifted.

MD: Speaking of playing live, tell us about the Sting experience.

Abe: k.d. had opened up about ten shows on Sting’s last tour. We got to hang out with the guys in his band. Manu Katche was Sting’s drummer at the time, and he’s an amazing guy and an amazing drummer. But there were definitely moments where it looked like he was almost disinterested in the gig. He didn’t look like he was passionate about the music he was playing, which is too bad. But you never know what’s going on in someone’s life.

Anyway, Kipper, the synth/keyboard player and producer of the last k.d. record, was producing trumpet player, Chris Botti, so they called me to play on half of his record–Vinnie [Colaiuta] played on the other half. And we got on great. I guess Sting heard the record and they told him we had fun in the studio, so when Manu decided to leave the gig, I was the guy Sting thought of.

I had just finished recording Paul’s record when Sting called, and didn’t really know when the record was going to be out and if there was going to be a tour or not. But I knew the Sting tour would only be two or three months. As it turned out, I was able to do the tour. I did the Concert For New York with Sting and Paul, and then the Sting tour started the following Monday. I went from the biggest experience of my life to the next biggest experience of my life.