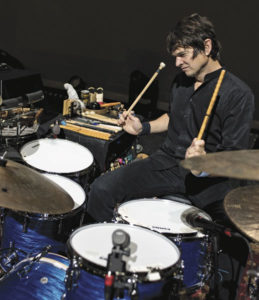 Welcome to the MD Drummer portal for Glenn Kotche. Here you can explore both public and Modern Drummer exclusive content related to Glenn Kotche. Our drummer Portal features news, lessons, videos, *Magazine Articles, MD Products and more. Be sure to navigate to other drummer pages by selecting their name in the dropdown above or by clicking Drummers in the navigation menu.

For a percussionist and composer as energetic, inquisitive and versatile as Glenn Kotche, it’s his sense of balance—his ability to thrive in different and seemingly disparate worlds—that really makes him stand out as a musician.Since 2001, Kotche has been the rhythmic anchor in Wilco, one of the most beloved rock bands on the planet. His first studio outing with the Chicago- based band was the breakthrough Yankee Hotel Foxtrot, and has continued over the course of five albums, including the Grammy-winning A Ghost Is Born and the critically-acclaimed The Whole Love. He has appeared on over 80 recordings by artists as diverse as Andrew Bird, Edith Frost, Neil Finn and Radiohead’s Phil Selway, and he’s a founding member of two other bands— Loose Fur, with Wilco frontman Jeff Tweedy and longtime collaborator Jim O’Rourke, and On Fillmore, with upright bassist Darin Gray. He has also written music for classical and post-classical ensembles like Kronos Quartet, the Silk Road Ensemble, the Bang on a Can All-Stars, So Percussion, eighth blackbird and many more. Unsurprisingly, Kotche has drawn the praise of his peers from all corners of the musical spectrum. “I could never find another drummer who was Glenn Kotche,” Jim O’Rourke told Time Out Tokyo in 2013, “because there isn’t.” In the program notes for Ilimaq, a piece written in 2012 specifically for Kotche, composer John Luther Adams observed, “…in the hands of a musician like Glenn, the drum set is a one-man percussion orchestra.” More at www.glennkotche.com

No items found
Note: Some MD articles are only available in pdf format. Those articles do not appear in this list. Subscribers to Digital and All-Access can view every Modern Drummer issue in their available formats. Browse all MD issues from our archive here.
September 2020:
18 Drummers to Follow on Instagram

Worldwide pandemic or not, we’re all spending more… 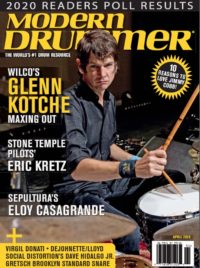 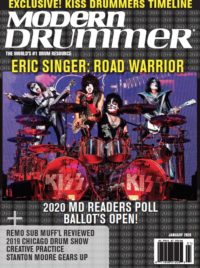 The Show, now in its twenty-ninth year, is one of the largest and longest-running drum exhibitions in the world. 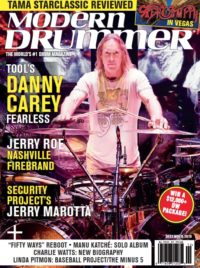 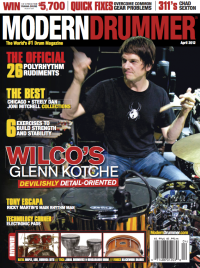 The lengths some people will go… Wilco’s compositionally minded drummer prepares his kit with a glorious array of mechanical and digital devices, each with a specific, meaningful effect—and its own set of performance demands. 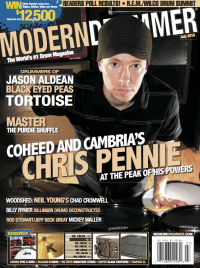 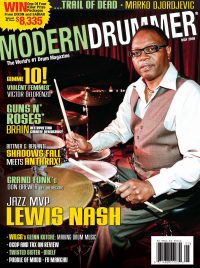 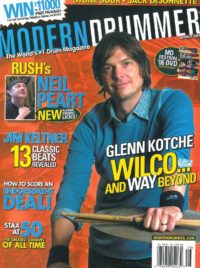 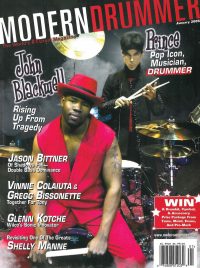 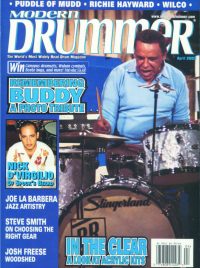 This past April 21, Eric Slick, the drummer for the ’60s-influenced indie-rock band Dr. Dog, released his debut solo album, Palisades.

“The first time I heard Jaki Liebezeit’s playing with Can,” says Wilco drummer Glenn Kotche, “I was hooked. You can tell instantly that there was so much going on with his playing just under the surface.

Brooklyn-based indie-rock band We Are Scientists’ fifth album, Helter Seltzer, released digitally this past April 22 and physically on June 3, is an advanced-level course in hook-ology.

See what’s in the pages of the October 2015 issue of Modern Drummer magazine featuring Brian Frasier-Moore and where you can get it….

Glenn Kotche has one of the most distinctive setups in the industry, with more sticks and homemade percussion trinkets than we could list fully. We caught up with Kotche during a Wilco show at Louisville’s Iroquois Amphitheater, where he was using a Sonor ProLite drumset. “It’s a beautiful maple kit, …

Many drummers don’t think about the edges of drum shells in terms of their impact on sound, but they can actually change the timbre quite dramatically. Therefore it’s a good idea to have a handle on different bearing-edge options and how they’ll affect the sound, in order to choose the …

Nonesuch Records will release two new Wilco collections on November 17 in conjunction with the influential Chicago band’s twentieth anniversary. The first, Alpha Mike Foxtrot, is a four-CD/four-LP/digital-box-set of rare studio and live recordings collected from the band’s extensive audio archives. The second, What’s Your 20, is a two-CD/digital compilation …

Category: Book Review, Drummers, Reviews
A Beat a Week: A Total Percussion Approach to Playing the Drumset by Glenn Kotche

The Wilco drummer’s method book might take you places you didn’t know exist.

Wilco drummer and composer Glenn Kotche invites musicians, producers, and fans to Blend (blend.io) to reimagine his seven-movement piece “Anomaly,??? which was composed by Kotche for the renowned Kronos Quartet and is featured on his latest album, Adventureland, out now on Cantaloupe Music….

Click here to check out our review of the new Dixon Cajon Pedal Plus, which is featured in the June 2014 issue….

I started playing percussion in fourth grade and then drumset in seventh grade. The bulk of my education comes from my high school’s extracurricular activities like marching band…

Category: Drummers, On the Beat
Kenny Savelson of the Droves

Category: Drummers, On the Beat
Daniel Bédard of Sharcüt

Hi, drummers! My name is Daniel Bédard, and I’m a drummer from Montreal. I’ve been drumming now for around sixteen years, and I’ve played with a lot of different artists here in Québec. I’m writing to talk to you about my band Sharcüt, a trio composed of guitar, bass, and …

On Tour And On Stage: 9 Lives (+9, +9 More). MD’s editors just can’t keep a list of their favorite albums short–even in service of a can’t-resist pun. Twenty-seven live albums you gotta have.

Climb around the back of Glenn Kotche’s drumset in Wilco’s rehearsal loft/recording studio on the northwest side of Chicago, and what you’ll see is part hardware store and part orchestra percussion pit.

Mike and Mike discuss the relationship between 6/8 and 3/4 time and how they teach them.

In this episode, Mike and Mike discuss Wilco drummer Glenn Kotche’s solo drum composition “Monkey Chant.” Then they share some ideas for how to apply the exercises from the classic book Stick Control to the drumset. The featured artist is UK session great Ash Soan. Up for review is Gretsch’s …

In this episode, Mike and Mike share two more of their favorite drum tracks before diving into the topic of practicing and knowing when to move on. Next they crack open the December 2016 issue of Modern Drummer and discuss jazz great Ralph Peterson, who’s featured on the cover. Up …