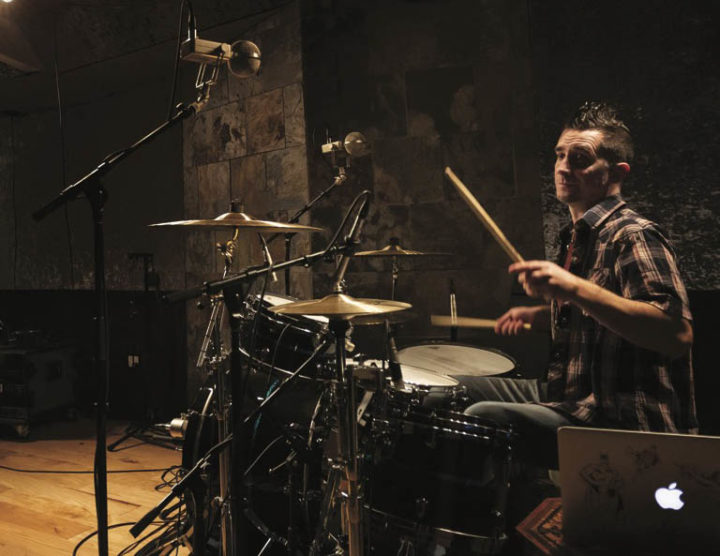 Offspring drummer Pete Parada relocated with his family to Nashville in 2011 from Chico, a small college town in northern California. During his house hunt, Pete needed a room that could become a home studio. “I was adamant about that,” he says. “Nobody has basements in California, plus the houses are so close together in my old neighborhood that I wasn’t able to play drums without disturbing the neighbors. I had a shed with some electronic drums, but I couldn’t open up and hit a real kit or record. So that was a must for me in Nashville.

“I was specifically looking for a space that could accommodate a drum studio for recording, teaching lessons, and making videos,” Parada continues. “The house we found is perfect because the basement has a living room area and a section that we converted into the studio. It’s completely underground, and that made it much easier to soundproof.”

Pete wasn’t trying to accommodate a whole band. He was more interested in doing personal projects, such as recording his young daughters, who are both aspiring musicians, filming lesson videos for his YouTube channel, and tracking drums for clients. “The space that we carved out was just an empty cement bunker,” he says. “It’s 700 square feet of foundation under the front of the house that curves around in an L-shape, which worked out perfectly for a control room and drum room. We put a window in and a soundproof door so we have a separate room where we can hear what the mics are picking up without being in the same space as the drums. I worked with Joseph ‘Zap’ Danner. He’d built Ray Luzier’ studio in Los Angeles. That was a small space, but when Zap was finished, it sounded like a gymnasium.”

Being that the studio is in the basement, the low ceiling height was a primary concern. “I don’t have tall ceilings,” says Parada. “So Zap incorporated a lot of angles so that everything sounds warm without being fluttery—no reflections or echoes. The room is longer than it is wide, so if I put the room mics back far enough it gets a big sound. I picked up a great tip from John DiBiase, an engineer that works with the Off spring. He had me put the room mic on a low stand and angle it at the floor. That way I maximized the low end while cutting down on the cymbals a bit. That was a game-changer. It gave me a much larger sound because not only was I getting the static sound of the room but also the reflections off of the floor.”

The floors in the basement are concrete. “I was fine with that,” says Pete. “I thought it would be cool to just stain them, but Zap cautioned me not to. He said that if I didn’t lift the studio floors, my family would kill me because the sound would travel up the walls and through the entire house. Now the room floats on about two inches of industrial-grade rubber. I can come down here and play at three in the morning and nobody hears a thing.”

The basement walls were treated similarly. “To treat the concrete walls, we first left a two-inch air space,” he explains. “Then we built a room inside the room with dense blue-denim-type insulation, called UltraTouch, placed inside the 2×4 wall construction, followed by soundboard, and then two layers of drywall. As hard as I might be playing down here, all anyone hears upstairs is a little tapping.” 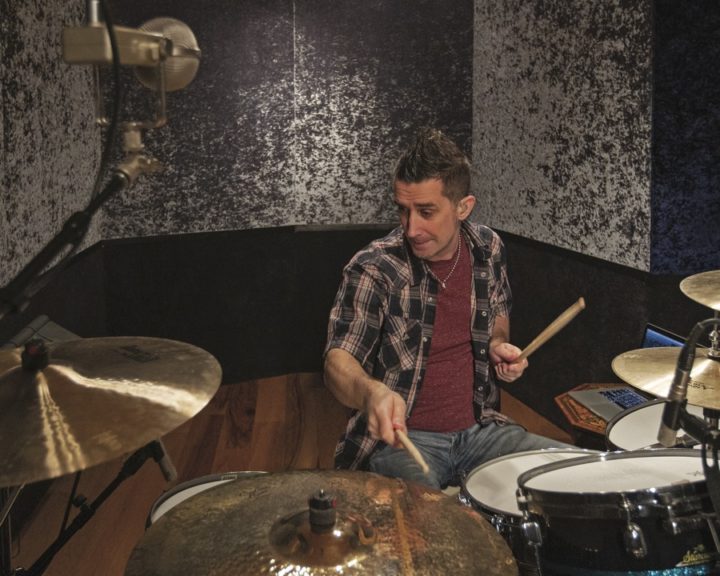 To keep the studio sound live, Parada utilized a wooden ceiling. “I was worried about the room being too dead,” he says. “So we did a plywood ceiling that we sanded down to get it super smooth, and then we covered it with three coats of lacquer. That helped to brighten the room a bit.”

To control sound reflections, the walls are covered with a combination of carpet near the bottom and crushed velvet that’s been stretched over quilted batting placed in wooden frames. “We have a radon-release pipe going up one wall, so we built out the wall into a V-shape and covered it with stone tile,” says Pete. “That also helped to brighten the room, and if I put a mic right next to it, I can get some interesting sounds if I’m going for something a little weird.”

One of the big challenges Pete faced when building the studio was quieting down the sounds coming from the HVAC system. “We had to box that all in,” says Pete. “We had to cram all the air ducts into the ceiling and soundproof the two units in much the same way that we soundproofed the room. Fortunately Zap was able to develop a cross-beam system that’s able to support everything in the ceiling.”

Parada spent a lot of time researching microphones while at the Winter NAMM Show. “I met with a company based in the U.K. called Sontronics. They have a line of mics that are specifically EQ’ed for each drum. They shipped out some samples for me to try, and I loved them. I don’t have to add a lot of EQ, so it’s essentially a plug-and-play system. There are more expensive mics I could have gone with, but if you have a good-sounding room and good mics, you’re going to get solid sounds.”

If Parada had to pick a favorite model in the Sontronics line, he’d go with the overhead mics. “I use the Orpheus,” he says. “It picks up the entire kit but is especially nice on the cymbals. Often I don’t even need a pencil condenser on the hi-hats or ride because I’m getting enough sound from the overheads.”

Parada has a preference for miking the outside of the resonant bass drum head as well as the inside. “The inside mic is picking up a lot of the attack and punch, while the outer mic is picking up more of the body and low end,” he says. “I also use a vintage 1960s Turner cardioid mic that my dad had given me. I put it near the side of the snare in addition to the top and bottom mics. That enables me to pick up some of the character of the shell of the drum. That’s something I picked up from working with producer Bob Rock.”

All fourteen of Pete’s mics run through a snake box that connects to a Yamaha digital mixing board in the control room. “I have different scenes programmed into it. Some are for recording, and some are for making videos. I don’t have a lot of outboard gear; I try to keep it simple.”

Having his own studio affords Parada the opportunity to experiment with sounds. He recently completed a project for Leonie Kingdom, an up-and-coming indie folk artist from Australia. “It was a beautiful, lush ballad,” he recalls. “I tried four or fi ve snares before deciding on a vintage Slingerland drum from the ’50s that my father had given me when I graduated high school. It produces a slightly more muted sound, but is very warm and fat, which is ideal for a slow 6/8 ballad. I tuned it to the point where it filled the spaces perfectly between the kicks.”

Parada also recently finished up a project for Michael Ciravolo, president of Schecter Guitars. An accomplished musician in his own right, Ciravolo made a record by bringing in different people he’s worked with over the years, including Robin Zander from Cheap Trick, Al Jourgensen from Ministry, Doug Pinnick from King’s X, and Ice-T. “We just did a remix of [a track],” Pete recalls. “I did the drums, and Zakk Wylde came in to add a guitar solo. That’s certainly one of the coolest things that I’ve done here in the last year.” 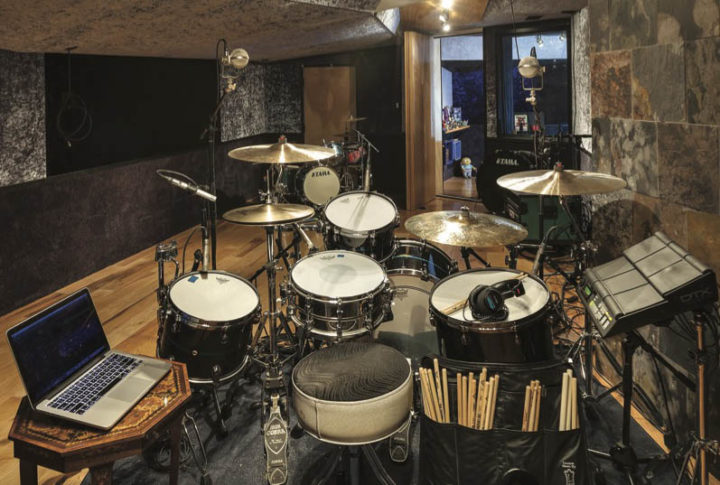 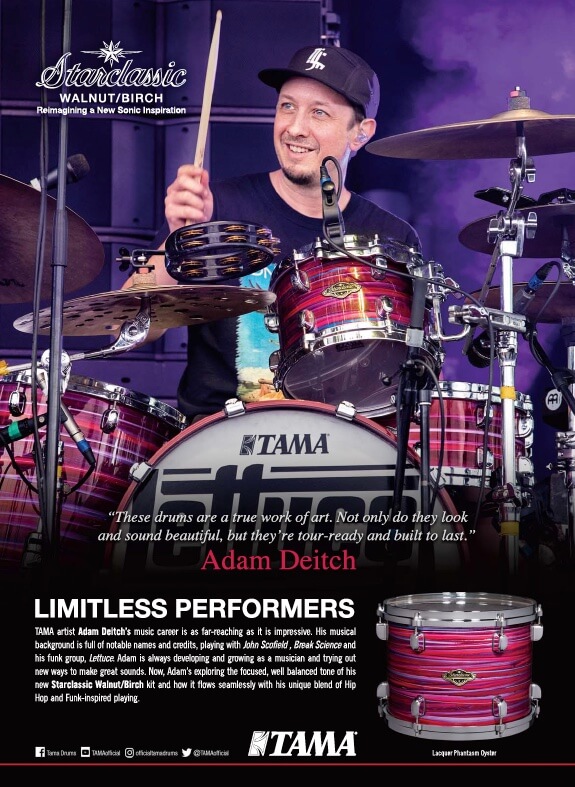