We’ve posted the song below, and you can also stream it HERE.

Along with her keyboard-playing sister Asya, drummer Chloe constantly strives to evolve the band’s sound, as well as her production concepts for creating grooves.

Here, she details the hybrid electronic/organic — and programmed/played — blend she deployed for the rhythm tracks on “Capital T.”

What kicked off your hybrid approach to drumming?

I’ve been drumming since I was five years old. I’m 26 now, so that has been two decades of drum kit for me. A little over a decade ago, I got one of the early versions of Apple Logic, and I remember using electronic drum loops for fun, but I never took loops seriously enough to use in a song. But things really shifted around 2014, when Asy and I decided to experiment with pop music, which turned into the song, “Committed to the Crime” for the Rick And Morty cartoon series. Since then, it has been a completely new discovery for me with electronic drums and programming — almost like a drumming out-of-body experience. The way your brain works when you create on the computer versus in real life is so different, and I love the diversity it brings to sounds and fills.

As someone with a lot of experience playing the drum kit, have you found any downside to programming?

Programming beats has been super fun for me, but it also has given me “Imposter Syndrome,” because it doesn’t feel completely like me when I create a pop beat or hip-hop beat on Logic. It feels like the real “drumming” me is becoming obsolete, and perhaps lost by my own neglect. I’ve always felt it’s possible to bridge the worlds of live and electronic drums, but the examples I’ve heard don’t sound right.

I don’t want to lose the largeness and precision of electronic drums by adding real drums. A real kick drum is never going to make you feel as cool as when you feel an 808 sub in your chest. That’s one example. In fact, blending live and electronic drums has been more of an imaginary dream for me until “Capital T.”

So for “Capital T,” how did you decide when to deploy electronic programming and when to play beats?

I feel very drawn to human feels—maybe it’s my inner revolt against an AI takeover [laughs]. I had the electronic beat programmed, and it sounded cool, but I felt it was missing a part of me. I love adding live drums with electronic drums to create a conversation — machine versus human — and force them to work together and syncopate nicely. So I improvised over the song with live drums, and I tried to create a weird, syncopated pattern that played off the electronic parts.

What was the gear that you used for the track?

I’ve been getting really into Sonic Charge instruments. I used their drum machine, Microtonic, on this song and their effects plugin, Permut8. I created a loop, and then went in and shifted it around to make it flow with the song, and not sound too stuck in the loop rhythm. I’m a big Aphex Twin fan, and I was trying to create something that sounded more in that vein. For the live drums, I played my DW Pacific kit that I use for touring and traveling — my sister Asy and I were in an Airbnb in Joshua Tree when we made this song — and custom-collection Paiste cymbals. By the way, the Dave Smith Tempest is my favorite drum machine. Yum!

Can you detail how you used the software to create some of the parts?

I found a Microtonic preset with a drum loop I liked, but I had to change it a lot, because I wanted it to feel like my own. In fact, I only used the hi-hats, and I used MIDI to add and delete notes and move them around. I like to work in real time while the song is playing. Then, I can hear Asy’s piano and synth parts going, and I just make things up on the spot using my MIDI keyboard. I also generated fills that I couldn’t totally hear in my head by messing around with quantizing certain fills to triplets or quintuplets or some other weirder subdivision to create a spontaneous fill sound. Once the drums were created on Microtonic, I added 808 sub bass notes to go along with the chords of Asy’s piano.

What about the live drums?

I didn’t just sit down and drum along to the track. I like to get the beat out of my typical realm by approaching it in a different way, so I recorded each drum separately to get a cleaner sound that I could blend into the electronic drums. Recording each part separately also gives you the ability to create layers of fills and different rhythms that wouldn’t necessarily happen if sat behind the kit.

How has your concept of rhythm evolved throughout your recent recording and production experiences? For example, “Capital T” has a light, chattering groove. What inspired that?

I’ve always related more emotionally to rhythm than I do to lyrics, and felt like I wanted a beat that would soothe my mind. Loops are soothing, but they can drive you crazy if you don’t have enough variety in there. “Capital T” has a ton of fills and variation in the beat, because I probably spent way too much time in MIDI world. Recently, I’ve been getting into particularly cheesy, staple sounds of certain musical eras. For example, the 808 cowbell sound is so overused it has now come around to having like a “meme meaning” when used. That sound is only used as a fun “wink wink,” and I love that about this time. Also, the ’90s techno 909 hi-hat can be used in a funny but tasteful way that I love. We’ve come around that bend where we are referencing something that is referencing something that was once referencing a real drum—that’s crazy! So far from reality.

What are you listening to now for inspiration?

Right now, I’m listening to a lot of Fleetwood Mac, and a lot of this new artist Yaeji—two completely different worlds. I like to listen to things from different times, so I’m not too influenced in a linear way. I’m interested in blending and juxtaposing disparate sounds. I would be very happy if I could ever achieve the drum sounds on Rumours, but mixed with new, weird production stuff.

Are there any beats and sounds that tend to bore you these days?

I don’t get bored of drums at all! I can listen to the most simple pop beats in Top-40 songs and think they’re genius in how they can be so simple while keeping my brain interested. There’s an art to that. Less is more.

Still, do you ever wish more drummers would explore less-traveled landscapes?

I’m very okay with conventional drumming, I think it’s all about serving the song while maybe trying to slip your drumming DNA in where it works.

How do you determine the mix and panning levels for the electronic parts and played/organic parts? “Capital T” appears to have a pretty organic blend. Any tricks to making that happen?

I like to get it feeling human without it being super obvious what is human and what is electronic. I know the mix is right when they blend well, and one or the other doesn’t take center stage. That said, I do like letting the sub bass take center stage. I am a bass fanatic. Never enough bass. Bass is my cowbell [laughs].

On the Beat With Chris Reeve of Filter: Connecting and Creating Relationships 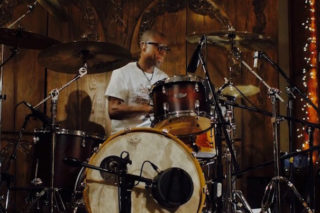 On The Beat with Jacobi Gunter: Doing What I Love To Do!