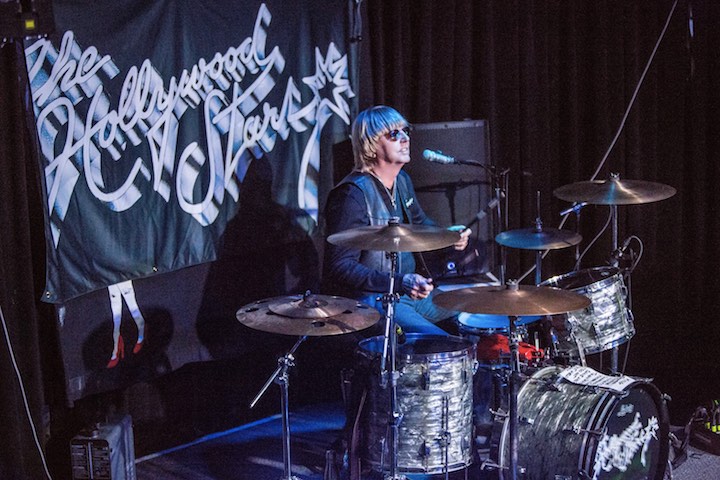 Hello MD readers! I’m the drummer for the reunited band Hollywood Stars. We are a Los Angeles band originally assembled in 1973 by legendary rock ‘n’ roll artist/manager/songwriter Kim Fowley. We were Kim’s project two years before he launched the Runaways.

The Hollywood Stars were the first to record “King of the Night Time World” and “Escape,” songs that were later re-recorded and appeared on multiplatinum-selling albums by Kiss and Alice Cooper, respectively. Kim Fowley and our band’s main songwriter, Mark Anthony, wrote both songs.

The glam rock years were a crazy time to be a musician on the Sunset Strip. Our clothes were tight, especially our jeans. It wasn’t uncommon to go on stage in makeup and with boas around our necks. I still have a pair of four-inch, lime green platform boots, which would, of course, make me stand four inches taller than usual. It’s a wonder I didn’t break my neck, considering how many falls I took.

During 1974-1977, the Hollywood Stars toured with the Kinks (for 1977’s Sleepwalker) and opened for the New York Dolls, Bo Diddley, the Ramones, and Iggy Pop. In turn, a solid lineup of future superstars opened for us, including Van Halen, Journey, the Knack, and Quiet Riot. 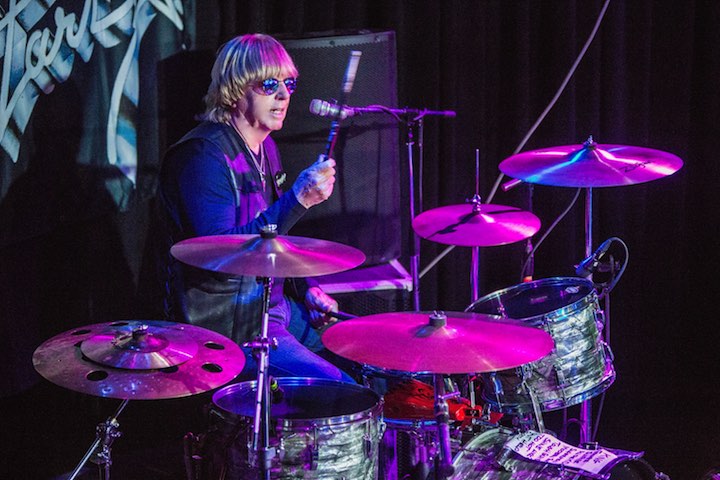 There was a period during the Hollywood Stars in which the band had two drummers. It was an awkward situation to get used to, but eventually Bobby Drier and myself made it work. Bobby had a certain style and I tried to play around it, and add to it. We experimented a lot. For example, we’d play poly syncopation where he’d play the downbeat and I’d play the upbeat. The Stars’ anthemic rock style actually turned out to be more powerful with two drummers driving the beat.

During my earliest years as a gigging musician—the mid-1960s—I was in the house band at a historic Hollywood venue called the Hullabaloo. The band was the Palace Guard. There were several weekly syndicated pop music TV shows at the time such as Shindig!,Shivaree, 9th Street West, and Hollywood A Go-Go, and often the producers would come up with skits in which the participating music acts would take part. I have fond memories of the Palace Guard once having to compete in a tug of war with Paul Revere & the Raiders. It was a thrill in 2011 when footage of the Palace Guard on a program called Where the Action Issurfaced on YouTube.

I’m excited to be back alongside my rock ’n’ roll brothers in the Hollywood Stars. We had a rough time with the major labels to which we were signed in the 1970s (CBS and Arista), resulting in our first two albums being shelved for four decades. Our 1974 sessions, recorded when we were a glam rock band, finally surfaced in 2013 as the gatefold vinyl release Shine Like a Radio: The Great Lost 1974 Album(Last Summer/Light in the Attic). A second unreleased album, the more power pop-leaning Sound City, recorded in 1976, will be out August 23 via Burger Records.

I started listening to drum parts when I was very young. Howie Johnson from the Ventures and Dick Delvy from the Challengers both made strong early impressions. Little Richard’s early tracks were killer, and I loved the Viscounts’ “Harlem Nocturne,” Cozy Coles’ “Topsy Pt. 2,” and Booker T & the MG’s “Green Onions.” Unsurprisingly, there was nobody who inspired me as much as Ringo Starr. I learned the basics by listening closely to him—bass drum patterns, hi-hat/cymbal dynamics, and cool drum fills. He also taught me not to overplay. As a drummer, you find that you become more proficient with your hands and feet as time passes. There may be a riff that you couldn’t accomplish when you started out, but you can do it now!

My go-to gear is a 1968 Sky Blue Pearl Ludwig kit with a ’70s Premier 6.5×14 snare. I love the crack you get live or in the studio. I bought this setup in the late 1970s from Hunt Sales and have been using it ever since. I use mostly Ludwig hardware except for my vintage Ghost bass drum pedal. I prefer the round sound you get from the Evans Hydraulic heads for the toms and really like the Aquarian bass drum heads, they are great. I’ve always used the combination Zildjian crash and hi-hat cymbals with my Paiste 21″ ride. These are all the early-’70s makes. I’ve also recently switched to Vic Firth drumsticks. I’m proud to be old school.

Thanks for reading my “On The Beat” and I’ll see you on the upbeat!

Watch Terry drumming for the Palace Guard on “Where the Action Is” (1966) here:

For more on the band, visit www.thehollywoodstarsband.com.